The basketball equivalent of "the grandaddy of them all" (only featuring games that have an actual bearing on the eventual national champion) kicks off today inside Madison Square Garden as first round play in the Big East Tournament tips at noon.

It used to be that the opening slate of games signaled a make-or-break day for the small handful of Big East bubble teams, but the expansion of the tournament has turned it into a day where the best those teams can hope for is to stave off at-large bid elimination for another 24 hours.

Eight Big East teams are considered by most in the know to be locks for the big dance, while three more - South Florida, Connecticut and Seton Hall - have the opportunity to play their way in over the next few days. All three are in action today and all three are a first round loss away from punching their ticket to the NIT.

Here's a closer look at Tuesday's lineup of games. 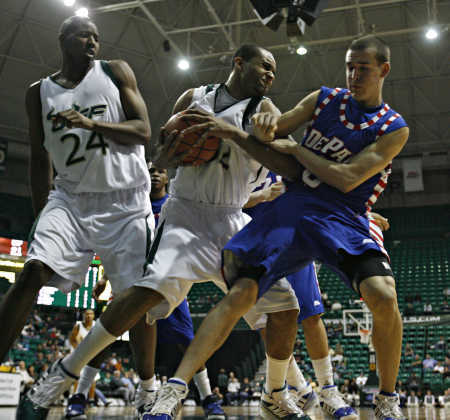 After a remarkable(?) 0-18 regular season, Depaul actually defeated Cincinnati in the 16/9 game a year ago, becoming the first 16 seed to win a game in any men's college basketball postseason tournament. That's one more Big East Tournament win than South Florida, which joined the league in 2005-2006, has to its credit.

The Bulls evened their league mark at 9-9 with a regular season-ending victory over Connecticut last weekend, but still need a win over eighth-seeded Georgetown and perhaps a toppling of No. 1 Syracuse to ensure themselves of a spot in the field of 65. To have a shot at either of those teams they'll first have to get by the Blue Demons, a team they narrowly defeated (63-59) seven days ago.

Despite the stark in differences in overall records, I'd be surprised if this one isn't competitive. Depaul has a pair of players in guard Will Walker and big man Mac Koshwal who would start for just about every other team in the league, and rarely in their 17 league defeats have they been blown out. USF has known even less postseason success than the Blue Demons, and that's absolutely a factor when you're playing for your season beneath the bright lights of Madison Square Garden.

The Bulls will win, but only because they have a guy in Dominique Jones who isn't intimidated by any stage, and he'll be the difference in the last five minutes.

Rarely has a team with as much talent as Connecticut suffered through such a sub-par conference season. Three Huskies were honored when the Big East announced its postseason awards earlier this week, and yet UConn limps into the world's most famous arena sporting a league record of 7-11. Husky head coach Jim Calhoun announced following Saturday's loss to South Florida that seniors Stanley Robinson, Jerome Dyson and Gavin Edwards would not start against St. John's as a "coach's decision."

UConn is riding a three-game losing streak for the third time this season, but they also can lay claim to the third-hardest schedule in the country as well as wins over a pair of top-ten teams in West Virginia and Villanova. Still, their late and mid-season slides probably demand no less than three wins in New York to avoid an NIT bid just 12 months after a Final Four appearance.

That run would have to start this afternoon against a St. John's team that has been dramatically better since the return of senior Anthony Mason Jr. The Johnnies are playing with some weight on their shoulders as well, as word has circulated this week that Norm Roberts may need a strong performance from his team in the Garden in order to save his job.

Connecticut is obviously the superior team on paper, but the Red Storm can actually match them in terms of size and athleticism. With all the outside factors at play, there's no telling how this one will play out. My guess is the Huskies find a way to win ugly. 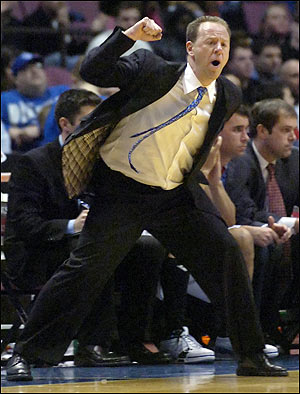 The Pirates come to the big apple carrying some baggage of their own after a weekend story in The New York Times chronicled in great detail just how unliked SHU head coach Bobby Gonzalez is by just about everyone who knows him.

While the timing of the story was a bad break for Seton Hall's NCAA Tournament chances, its Tuesday opponent is not. The Pirates are arguably the best offensive team in the Big East and will face a Providence squad that Jay Bilas recently dubbed, "the worst defensive team in the history of the Big East." SHU hung 92 on the Friars in a 12-point victory on Saturday.

Providence, which has dealt with chemistry issues for the second straight season, is riding a 10-game losing streak and might be ready to roll over and call it a year.

Rutgers' Fred Hill is probably coaching for his job while Cincinnati's Mick Cronin is also feeling some hear after his Bearcats rounded out a once-promising season by dropping five of their last six and playing themseelves off the bubble.

Motivation might be low for the Bearcats, who were once worried about seeding but now probably have to advance all the way to Saturday's title game to have a shot at earning a spot in the field of 65.

The highlight of the nightcap might be the battle between top Rookie of the Year candidates Lance Stephenson and Dane Miller. It will also feature Defensive Player of the Year Hamady N'Diaye manning the post against Cincy's sophomore stud Yancy Gates and his best friend from Senegal, Ibrahima Thomas.

If there were a likely upset pick on day one, it would be this one.

Keep it here throughout the day for updates and commentary.