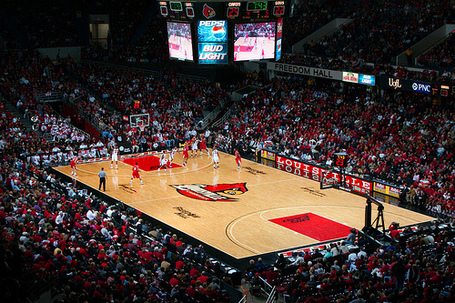 Make sure you check out DocCardsFan's post below (the majority of his post is after....The Jump).  In it, he mentions the UNC-UL game in 1999 as his first game at Freedom Hall.  I was there for that game as well, but it was not my first game at Freedom Hall.  My first memory of a Freedom Hall game was as a 5 or 6 year old with my dad, who is not a sports fan at all and wasn't at the time.  I still don't know why he took me to that game, or any game, but I remember Manuel Forrest was my favorite player.  Why? I have no idea.  But I remember telling my dad that either during or after that game.

The UNC game was a really important one for me, because like DocCardsFan talked about, it was all about being at home.  I went away to college, but I was pretty certain I would end up coming back home.  Every Christmas break, I would make sure I could get to a game or two.  Freshman year, it was the Marquette buzzer beater game.  My last year of college was the 1999-2000 season, and while I knew I wanted to come home eventually, that Christmas break was a weird one.  Getting tickets to that game, again with my dad for some strange reason, reminded me what I loved about living in Louisville and how I knew I wanted to spend the rest of my life here.  I took a few detours for work, but always made sure to make it to Freedom Hall when I came home to visit.

Growing up, I was lucky enough through my dad's job to have access to tickets.  He went with me a lot, but mainly got them for me and my brother.  We often took friends (and dates) instead of taking him.  But it seems like he was always there for the big games, always doing what he could to get us nicer seats, or into a friend's box downstairs, or a friend from work's lower level seats for big games.  Even though he didn't care about UofL at all, and still doesn't.  And looking back, it seems like my dad was prominently involved in my favorite Freedom Hall memories, even though he just went to be with me and couldn't name any of our starting five, much less the back-ups and other team's best players.

My favorite Freedom Hall experience hands down was the 1995 New Year's Day game against UK.  My dad was able to get three tickets to a box so he and my brother and I could all go.  At the time I remember thinking that I had never seen Freedom Hall more intense, start to finish, than that game.  And I don't remember any game since then being so intense.  18,000 people yelling as Brian Kiser stood near half-court trying to beat the press with 8 seconds gone off the shot clock!  The next day, my family traveled with my dad to watch him start his dream job.  That was a good week.

My second favorite is the aforementioned UNC game in 1999.  Just an amazing game start to finish.  And another one with my dad.

The 2003 regular season finale and Senior Night, the night of LUUUUUUKE.  Mom got tickets through her office, lower level, great seats.  Dad and I went, left after the game but before the speeches and went to dinner and just hung out that night.

The big games in the 1990s....UNLV, UCLA, Georgia Tech when they were really good, Purdue....all with my dad.  I still remember him quoting Butch Cassidy and the Sundance Kid during the UNLV game....."These guys are good" - he had no idea other than me telling him over and over again that they were #1 in the country.

After I moved back home for good and started law school, I took my now-wife on one of our first dates to a UofL game.  A lifelong UK fan, she told me she liked Freedom Hall because it was nice and intimate.  I still give her crap for that.

For four years, through law school and then from friends in later classes who got drawn in the lottery, I was able to get student tickets, and my wife and I have gone to almost every game since, or my brother, or friends.  Like the Marquette game that went to OT in 2006.  That was the night before my best man and my joint bachelor party (he got married a few months before I did) in Las Vegas, about twenty guys and one of the best times of my life.  So a group of us went to that game, got up the next morning and flew to Vegas.

The amazing Big East home schedule year after year.  I have seen more teams ranked in the top ten come in to play in the last 4 years than I remember seeing in the 1990s and first part of 2000s combined.

The more I think about Freedom Hall memories, I realize that the games that stick out in my mind are not just the big wins, but how the memories combine specific games and what was going on in my life at that time, and how the experience brought me and my dad, my brother, my wife, my friends closer.  I've sat in literally the last row on multiple occasions, sat in boxes in others, sat in the first two overhanging rows on the second level for many games, sat in the lower level, the upper level, behind the basket.....literally every possible area, seat or view.  But a game at Freedom Hall is always the same, and always means something because of the people you share it with.

My wife made fun of me because I kept calling the Georgetown game the last "week night" Freedom Hall game.  She thought that was dumb, but growing up in high school, coming back home and going to law school, you guys know what I'm talking about.  There's nothing like that feeling during the day of a big Freedom Hall weeknight game.  I'm sure everyone had their routine.  I know I had mine.  And coming home after a big game, win or lose, it felt special because it was a UofL game at Freedom Hall.

The new arena will be amazing.  There will be new memories, new firsts, new routines, new quirks, new smells, new brilliant plans to avoid traffic after the game, new everything.  And I hope that one day I can have a son or daughter who I can take to his or her first game there, like my dad first took me to Freedom Hall.  He wasn't a UofL fan, doesn't like sports and I'm sure he didn't intend for me and my brother to become the borderline obsessive (or actual obsessive) fans that we are.   But those Freedom Hall memories are more than just about wins and losses.  They are about the important things in life, our family and friends.  And I've been able to share those experiences with the people I love because my dad once took me to a weeknight game at Freedom Hall.  And we kept going back. I'm not saying I moved home just because of Freedom Hall, but going to the UNC-UL game with my dad during my last year of college.....

My dad won't read this (he's not into sports blogs).  But I will call him and tell him thank you.  And I will thank Freedom Hall in person on Saturday.