Share All sharing options for: Weakest Mascot Tournament: The West

Forget making your picks based upon seeds or their performance over the last months. This year, my wife is going to pick the most helpless mascot to win. So, here is IMO who would lose in a head-to-head matchup of mascots dueling to the death.  The weaker mascot (bold font) moves on to the next round. I think you all should have a pretty good idea who should win this one from the start.  I'll start in the West this post.

(1) Syracuse Orangemen vs. (16) the Vermont Catamounts.

Not much discussion here.  Nothing makes oranges deadly..... unless you count those sores in your mouth from the citric acid.

Chief Osceola kills bulldogs and 'Zags with flaming spears in his sleep. Zags movin' on.

Pickaxes, mountains, and headlamps versus this.

This is a matchup for the ages. The cutthroat entrepreneurial railroad tycoon against some little jockeys on a horse?  I'll alert the glue factory.

Way to go Minnesota. How do you make your state sound even less appealing?  Ah, yes. You name your state team after a cute prarie-residing rat. And your coach's name is Tubby? Sheesh.

This may be the most even matchup of the tournament. I'm taking the Grizzlies as the more fierce mascot for the simple reason that a bear actually bit my mother on a trip to Gatlinburg, TN.

They're no Tulane Green Wave.

I don't think there's any reason to show the next round of matchups: Syracuse is going to the Final Four. Tubby and his Golden Gophers brought their A game against the Mean Green, but they were no match for the Orange. 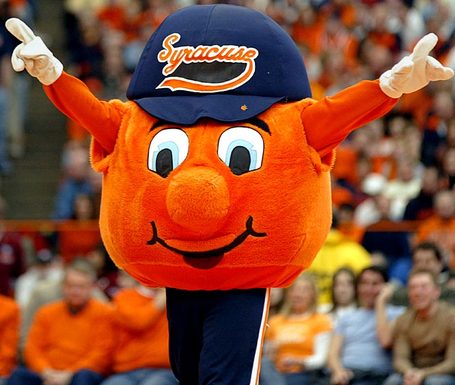 Your Final Four Favorite. You had better wipe that smile off of your face.