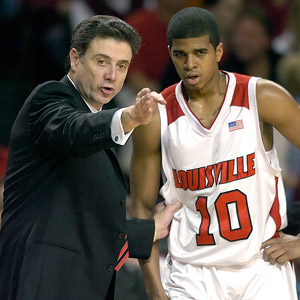 Credit the coaching staff for facilitating confidence that could pay dividends later this month.

Edgar Sosa deserves a lot of credit for his heroics in Storrs on Sunday. The coaching staff deserves a higher suit allowance.

Time out. 29 seconds on the clock. Tie game. For both teams, an NCAA Tournament bid lingers in the air like cigar smoke. Husky student section rumbling behind the Louisville basket. Pitino gives Edgar the green light inside the huddle. Asks him to make something happen. Horn blows. Edgar Sosa's ball. 133 miles away from Rice High School. 47 feet to the rim from midcourt. All eyes on you, #10.

Last night, while re-watching the last few seconds of the game, I thought about the movie Hoosiers. Coach Dale (Gene Hackman) calls a timeout with 18 seconds left in the State Championship Game. Tells his team in the huddle that he wants to use their clutch shooter, Jimmy Chitwood, as a decoy to set up a better shot for another player. Everyone stares at Chitwood, flashing looks of dismay. Coach Dale then asks "What's the matter with you guys?" and Chitwood says, with confidence, "I'll make it". 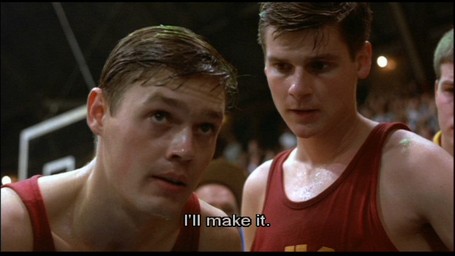 Sosa feeds off the pressure, the fans, the moment, the oft overstated bravado that is a New York City point guard. Yes, Peyton Siva is primed for a great career at Louisville. But today, this week, this March...it's Edgar's time. Throw out the efficiency stats. Forgive the missed free throws. Ignore the criticism. A Louisville team that plays well this March is a team that's led by a confident Edgar. A Good Edgar. An "I'll Make It" Edgar.