Of course they won. In hindsight, we should have all known this was going to happen.

Let's look at everything that U of L was up against on Sunday afternoon:

1) The Cards were coming off perhaps their worst half of basketball this season, one which resulted in a crushing home loss.

2) They were facing a Connecticut team loaded with talent and playing as well as anyone in the country, riding a three-game winning streak that included a pair of victories over top-10 opponents.

3) The Huskies needed this game just a tad more than the visitors.

5) Connecticut had not lost inside Gampel Pavilion this season.

All of these factors lead to only one plausible conclusion: Edgar Sosa hitting a driving lay-up in the game's final seconds to secure a Cardinal victory.

There is no way to predict anything this team is going to do, and I have no idea know why we all keep trying.

I'm not really sure where to start. CardsFan922 was right when he said that the game ball rightfully belongs to the entire team.

Jerry kept us in the game in the first half, TJ was outstanding before fouls sent him to the bench, Kyle Kuric stepped up and was phenomenal, Peyton Siva gave us all a pretty clear glimpse at the future, Samardo got hot in the paint late in the second half, Preston(!) almost single-handedly kept the game from slipping away, and then Edgar exercised about a thousand demons and made the kind of play a senior point guard is supposed to when the game's on the line.

Everyone wearing black did something to bring this one home.

The Syracuse win was obviously vastly superior to this one in terms of its significance, but I honestly think Sunday's victory was more impressive.

The Orange had been coasting for weeks, and played about as poorly as they're capable against Louisville. UConn, a squad which probably boasts more talent than the 'Cuse, came into the weekend playing its best basketball of the season, had far more to play for than the Orange had two weeks prior and put up a much better performance against the Cards than Syracuse did.

Again, this was a victory that everyone associated with the program ought to take a lot of pride in.

All three of Preston's (not lil') buckets during his personal 7-point run induced a stand up/right fist throw/"c'mon!" combination from your humble narrator.

Young man, I believe this belongs to you...!

Saying goodbye to Freedom Hall and Jerry Smith on the same day is something I've been dreading since news of the new arena first broke. Crazy towel antics, insanely over-the-top reactions after made shots, extremely affectionate behavior towards anyone and everyone around him; I think I've said, "look at Jerry!" at least 75 times over the past four years.

In all seriousness, those two guys have dealt with more turmoil during their senior seasons than they probably ever could have anticipated, and they deserved that moment.

If we end up just barely sliding into the NCAA Tournament, then I think you have to look at Kuric's buzzer-beating bank on Sunday and Reggie Delk's four-point play against Notre Dame as the two biggest shots of the season.

Sure, Sosa's reverse lay-up ultimately won the game, but who's to say Louisville doesn't end up prevailing in overtime? I honestly don't think they pull it out, or even have a chance to, if Kuric's shot doesn't bank in. It completely shifted momentum heading into the break, the Cards got the ball first and scored (ultimately making it a de facto five-point possession) and then seconds later had their first lead of the game.

Also, kudos to Siva for being in the right position to receive the inbounds pass and then locating Kuric and getting him the ball with enough time to get the shot off.

It was just a huge swing.

Seriously, if we're up by a point with around a minute to go before half in any game from here on out, I want three straight turnovers and three straight easy buckets for our opponent before we head to the locker room. You people think I'm joking.

Kemba Walker's good and he's not getting worse.

With this win, the Cards officially eliminated the possibility of having to play on the opening Tuesday of the Big East Tournament. Doesn't seem like a big deal now, but a couple of months ago it almost seemed more likely than not.

I love the trend that Dr. Hustle pointed out earlier:

And look where this could lead…

It's math. Simplify and divide. Arguing is futile.

I've been studying tape for seven straight hours since the game ended, and I've produced this report:

Times when it's OK for Jared Swopshire to attempt a three-point shot: When he's made a clean catch of a good pass, there isn't a defender within five feet and he's set himself and stared at the rim for at least one second.

Times when it's not OK for Jared Swopshire to attempt a three-point shot: Every other conceivable situation.

Watch Jerry Smith. Do as Jerry does. Hug as Jerry hugs.

I can't get over how well Kyle Kuric played. It wasn't that he had a great day from the field (his only miss was a dunk), it was that for a long stretch he was legitimately our best post defender. The kid is absolutely fearless.

The steal at the end was also kind of big.

My favorite part of the end of the game (Jerry F bomb excluded) was Preston's spike of the ball after Samardo blocked Walker's wild shot.

Just sayin'. It was cool.

Oh god...whew...I knew it'd be hard to get out, but I didn't think it would be that hard. Solid effort, stripes.

Samardo gave as frustrating a performance in the first half as I've seen all year. For long stretches on defense he appeared to be doing nothing other than watching, and then he would mysteriously disappear whenever a shot was attempted. I'm not sure if he was upset tha the wasn't scoring or if he just woke up not feeling like playing defense, but it was a pretty pathetic effort.

That said, he worked very hard on offense in the second half and made the shots we needed him to when he caught the ball deep in the paint. His effort level on defense also rose.

How do I know that the most wonderful time of the year is upon us? The jellybeans are out at CC Headquarters and I'm nervously downing them while Louisville is life-and-death in an enormous late-season game.

Without the play of Kuric, Smith and Peyton Siva, that game is out-of-reach by halftime. Those three guys kept us in the game when UConn didn't look like they were going to miss, and made the way we played in the second half matter. 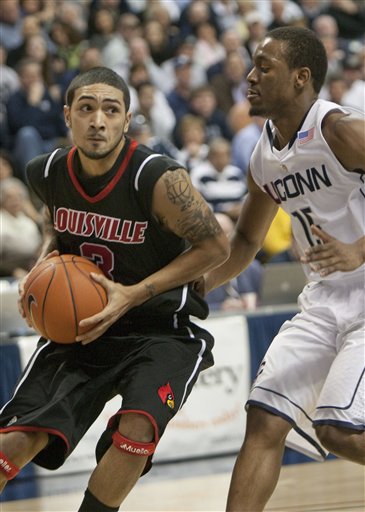