Officials banned from Big East Tournament because of calls against Louisville

Share All sharing options for: Officials banned from Big East Tournament because of calls against Louisville

Mike Kitts and Jim Haney, two of the three officials who worked Louisville's Jan. 30 loss at west Virginia, have been told by the Big East that they will not be working the league's conference tournament because of bad calls late in that game which went against the Cardinals.

On the game's most controversial play, a loose ball sailed out of bounds, directly at Kitts' face. Kitts, whom three Big East coaches assessed as being a good ref, instinctively turned to avoid contact.

Neither Jones nor Haney had an angle on the play. None of the three signaled which team should have possession. In such a case, the ball is supposed to go to the team that has the possession arrow in its favor. But Haney and Kitts, in a procedural error, checked the replay monitor. The ball was awarded to West Virginia with 6.7 seconds left.

Kitts, Haney and Jones have not worked another game involving Louisville since that game. Dan Gavitt, the Big East associate commissioner for basketball, said disciplinary matters regarding officials are handled internally. 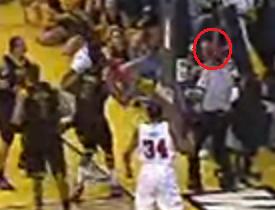 I know it doesn't change anything, but I'd be lying if I said this didn't make me feel good.

All those quotes about vengeance are crap. Churchill and Shakespeare don't even know what Bracketology is.