A Bridge Year Too Late?

Share All sharing options for: A Bridge Year Too Late?

December 11, 2004, I was at a friend's house watching the Cards beat Florida in basketball.  Florida was unranked, which is amazing looking back at the box score for that game.  The rarely-played freshman on that team would go on to win back-to-back titles, plus two of their starters from that game are currently in the NBA.  We were ranked 14th in the Coaches Poll and #13 in the AP, but I can remember not being that excited about the team that season.  The year before, Garcia, Dean, O'Bannon and the rest of the guys crapped out to Xavier in the first round after limping to the end of the season through injuries.  There was one freshman impact player, but the rest of the freshman class weren't expected to be impact players.  And everyone was more excited about a supposedly loaded 2006 freshman class. Considering all of that, I remember saying to my friend, I don't think this is a year to get excited about.  Next year will be much better.  Brilliant, I know.

I thought of that this week when trying to put this team's hot start into perspective and trying to decide whether to buy Final Four tickets.  At least I can say this time I somewhat predicted things, as this tweet from October confirms: "Buckles with the 2 best passes today. I can talk myself into this team."   Also see: Everyone Back on the Roller Coaster, 11/15/10.

I'm not really buying Final Four tickets, but there are definitely some similarities between this year's team and the 2005 team.  First, this team actually seems good at three point shooting.  Marra has started off so hot that I am shocked when he squares up and misses.  Siva, Knowles (when he takes a good shot), Justice, Kuric and Buckles are all capable of making a couple threes.  And the best thing about the threes we are taking this year is that they seem to be shooting them a lot like the 2005 team did: as a good, open shot created by a teammate, not just when you give up on the inside-out game that produces 20% nights like we've had the last few years.

Second, the team seems to really play well together and actually seems to be basketball players.  I can't really describe why what we are seeing this year looks so different than 2008-2010, but it doesn't look anything like what we've done the last few years.  Dean, Garcia and O'Bannon were fan favorites because it seemed like they really loved basketball, worked hard, and wanted more than anything to win.  They played well together, and the team was better than the sum of their parts.  I have a feeling no matter how this year turns out, this team will be very fondly remembered.  I really like them a lot.

Finally, similar to 2005, everyone was sorta looking forward to next year's recruiting class.

The biggest difference between 2005 and this year's team?  Proven upperclassman who could win close games.  All of those tough losses in 2003 and 2004 seemed to be worth it, because that 2004-05 team kept winning close, tough games with upperclassman leadership, luck, timely shots and overall just finding ways to win.  That will be the toughest thing for this team because the offensive strategy and a lot of the points we get (somewhat fancy passes, cuts, alley-oops, etc) are not going to be there during pressure-packed situation. 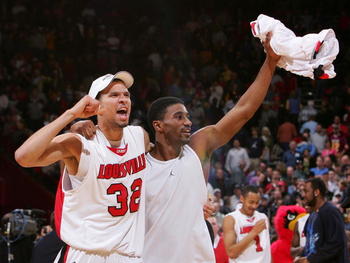 It's almost like Pitino's tournament strategy over the whole season: play loose, play fast, play aggressive, don't be nervous, don't think about the fact that it is the tourney, just go play basketball, but within the framework of what Pitino wants to do.  That strategy leads to huge blowouts like the Stanford, Oklahoma, Arizona and Tennessee games.  But when that goes away, you have to win close games.

I have no idea if this team can do that.  Who takes the big shot and can we run the offense and get points from half court sets?  Can you imagine when we are down 1 with a minute to go, does Marra get an open look?  Does Siva make the pass to a guy who makes a quick pass to TJ for a dunk?  Is SVT even on the floor?  Who knows how this team will pull out a close game.

I'm sure we aren't going to blow out teams night in night out in the Big East.  Luckily, our two toughest non-conference games are teams who want to run, which probably is really good for us because this team is really, really good at running because they pass well, make layups and make threes.  Nothing complicated.

I definitely did not expect a 6-0 start, especially one in which we are effectively ending games in the first half.  And we could easily lose to UNLV, UK and a deceptively tough first road game against WKU.  What are our chances?  To break up this wall of text a bit, how about some lists?

THREE REASONS THIS SEASON COULD TURN OUT AWESOME, LIKE DEEP TOURNEY RUN AWESOME

1.  Mike Freaking Marra.   I predicted that every game a fan could convincingly argue that a different player was the best player on the team.  The first few games held true: Rock Buckles, Siva, Jennings, Justice and SVT all had games where they seemed like the best player on the team.  But I think it is pretty clear that the last few games have revealed me an idiot: hands down, Mike Marra has become our best player.  He is hot from 3, he's dunking all over the place, he passes well, he seems to be playing good defense (hard to tell) and he doesn't really make mistakes.  The funniest thing about the Marra thing is that throughout the preseason, Pitino said the only two certain starters were Siva and Kuric.  Either Kuric was playing like LeBron in practice or Marra just does better in games than Kuric, who has had a rough start to the season.  Regardless, I don't think the Marra thing is a fluke, and I think if Kuric gets into a groove, our best line-up for the Big East is Siva-Marra-Kuric-Buckles-TJ.  There, I said it.

2.  Sticking With The Style.  Pitino coached the last few years like the NBA: match-ups, preparing the team for the different styles in the Big East and adjusting to the opponent's style.  It worked in 2008 and 2009, at least in conference play, but last year's team just didn't have it.  This year, I am hopeful that Pitino coaches the whole season like he does the tourney: we are going to run and gun, and we don't care what you are going to do.  The style works for this team, and even in a grinding game that the Pitt and Georgetown's of the world like to play, we have the ability to put up a quick 10 points with press, a couple steals and layups and threes.  Marshall seemed like a close game, and then you look up and we are up double digits.  Same with Butler.

3.  This Is Pitino's Dream Team.  Pitino has not thrived in the one-and-done era, and the "talented but enigmatic" players we started getting in 2006 caused as much heartache as they did life-long memories.  His best teams are ones who are smart basketball players who care more about the team winning than draft projections.  A few years ago, he started going after "four year guys," which, in Internet speak, meant less talented players.  Last year's class was unfairly being compared with the freshman up the road and other 1-and-done's across the country who could dominate in college right away.  But guess what?  Those guys are still here, and they are still just sophomores.  They got a whole lot better this year, and so did TJ.  Throw a basketball player like Elisha Justice in there, a raw but talented Dieng, a healthy Kuric and all of a sudden you have basically 10 good college basketball players who like each other, play well together and care about winning.

But these guys are all 3- and 4-star guys out of high school.  If you watch AnVillen's videos over and over and over and over and over and over, until someone is like, dude, stop, seriously, what you notice is that most of our highlight plays in the half-court are basically just guys creating for teammates, in what does not appear to me to look anything like the Pitino offensive sets we have come to know and love.  When this team just goes out and plays, they create scoring opportunities for themselves and for each other.  I think Pitino has sorta lucked into this, or bought into the one-and-done stuff as well, or maybe he's right and this team will lose a bunch of games this year.  But his pre-Fuller and publicly stated recruiting strategy over the last couple years actually seems to be coming true this season.  When you combine good talent with hard work and team work, you really have a chance do some damage.

THREE REASONS THIS SEASON COULD TURN OUT TERRIBLE, LIKE NIT TERRIBLE

1. The Schedule.  We have played a bunch of crappy teams, let's be honest.  Who knows how good Butler will be in March, but they looked awful in November and lost again last week to Evansville.  Ya, we are beating them badly, but the 2005-2006 team started out undefeated before losing to Kentucky.  Rumors of the Big East's downness have been greatly exaggerated, again, as there are now 15 Big East teams ranked in the top 5 and 34 ranked in the top 25.  It's true, look it up.  We can run all over bad teams, but we are no match athletically for Kentucky, UNLV and the best Big East teams on the schedule, and the gimmicky run-and-gun offense is pretty easy to slow down for smart, good teams.

2.  Weak inside.   Teams seem to score at will against us around the basket this year.  Yes, we have lots of blocked shots, but we just as easily give up second chance points and our bigs have to try to block shots because they aren't that good man-to-man defenders.  And if you get TJ in foul trouble, Dieng and Goode are not going to be able to guard Big East centers. Buckles is too small to play the 4 in the Big East.  And SVT will get eaten alive by athletic big guys for Georgetown, Nova, Syracuse, etc.  Inside defense and rebounding are a huge, heretofore hidden weakness that will get exposed soon.

3.  Eventually, The Fun Ends.  Can Mike Marra really average 16 points a game in the Big East?  Even though most of our games are on ESPN3.com, I assume Big East teams have internet connections and can scout us through the buffering.  And if they see us, they'll figure it out: basically, don't leave Marra open from 3.  Pitino said Kuric's troubles early in the season were caused by other teams scouting him.  Well, won't they do that to Marra now?  And without Marra as instant offense, if other teams slow us down, our half-court sets still suck and our defense isn't good enough to stop good teams.  Ya, we can get steals, deflections and blocks when we have the better athletes.  But we don't have better athletes than everyone in the Big East or UK. Eventually, teams will figure out how to stop us from running, and then we have to hope a couple guys get hot from 3.

I really don't know which 3 I buy more now.  But there's no reason to listen to me, I thought 2004-2005 was just a muddle-through-until-the-good-recruits-next-year season. Shows what I know.

But those memories of 2004-2005 have caused a thought to start bouncing around in my head: what if last year was the bridge year?