Share All sharing options for: Men's Soccer Preview: Louisville battles UCLA tonight for a spot in the College Cup

This is the biggest college soccer game ever played in the state of Kentucky. It's the most important game in Louisville's history, by far. Before this season, the Cards had never made it past the 2nd round of the NCAA Tournament. Tonight they can write another chapter in their fairy tale season by playing their way into the College Cup, the Final Four of men's soccer.
Even casual soccer fans should be familiar with tonight's opponent, the UCLA Bruins. Soccer in California is akin to basketball in Kentucky. And UCLA has sent more players to the professional soccer ranks than any other program in the country. Names like Cobi Jones, Brad Friedel, Paul Caligiuri and Joe Max-Moore, to name a few. 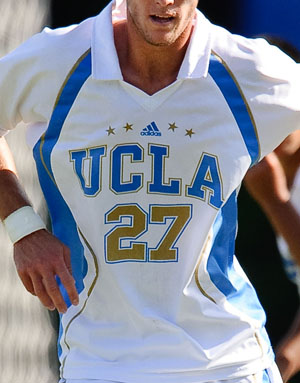 The Bruins' rep is more than big names, however. They're decorated where it counts. Those four stars on their kits, just above their namesake? They represent National Championships. UCLA's all-time NCAA Tournament record is 64-34. This is their 28th straight NCAA tournament and 35th overall, second only to St. Louis' 46. In summary, they've been here before.
One reason to be optimistic as a Cardinals fan? Experience.
31 of the Bruins' 36 goals this year were scored by an underclassman. Aside from 5'-7" freshman midfielder Dylan Mares who leads the team in goals (8), Louisville is paced by upperclassmen.
Louisville statistical leaders include junior forward Colin Rolfe, who leads the team in total points (assists + goals) with 20, junior midfielder Kenney Walker in assists (7), junior midfielder Nick DeLeon in shots (63), shots on goal (28) and game-winners (4), and junior goalkeeper Andre Boudreaux, who ranks in the top ten nationally with a 0.59 goals against average.
One more interesting stat: UCLA is 2-4-1 when playing East of the Mississippi over the last three seasons.
Ken Lolla: "Being in front of five thousand or six thousand fans again and the opportunity to go to the Final Four is very exciting for us. My guess is [UCLA] probably won't like the cold."
Kickoff: 7pm EST
Location: Cardinal Park, Louisville, KY
Weather: Below freezing with snow flurries
Live Steam: http://www.ncaa.com/allaccess/
Commentary: Sean Moth
Kits: Louisville in white, UCLA blue
Prediction: 3-2 (Louisville in 2OT)