Share All sharing options for: Darius Ashley charged with DUI

It was all going a little too well. 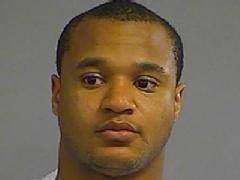 But of course it couldn't be as simple as your basic, run-of-the-mill DUI.

A Louisville man was charged with DUI after he passed out in a restaurant drive-through.

Police said they were advised by another driver around 2:30 a.m. Friday that 20-year-old Darius Ashley was passed out at the restaurant on 1500 South Brook Street.

According to an arrest citation, officers found Ashley unconscious behind the wheel of a car with the engine running and in gear.Ashley woke up when officers knocked on his car window. Police said that when he opened the car door, Ashley was glassy eyed, had slurred speech and smelled strongly of alcohol.

Police added that Ashley was unsteady on his feet when he got out of the car.Ashley also failed a field sobriety test, police said. After which he was arrested for operating a motor vehicle under the influence under 21-years-old.

UofL head football coach Charlie Strong said he is handling the situation internally and Ashley will be disciplined immediately.

Playing in your first bowl game > blacked out Taco Bell at 2:30 a.m.