Some random thoughts I had after this past week:

--Thoroughly enjoyed watching the Cards dismantle Rutgers last Friday.  Also want to mention that the two players I mentioned in last week's blog, Bilal Powell and Johnny Patrick, did in fact have great games.  I wouldn’t call it a bold prediction, but I was correct, which always makes me feel good.   Looking forward to the Cards finding out what bowl game they will be attending.  It is a great reward for the Louisville program and a fitting way to send the seniors out.

--This time of year you start to see all of the coaching changes taking place.  Coaches are fired, interviews begin, etc.  It got me thinking about how thankful we should be of the way Tom Jurich went and got Charlie Strong last year.  A lot of athletic directors think they make the right hires and are setting their programs up for success, when in reality things don’t work out and they have to start over (Miami, Colorado, etc.).  Tom Jurich hit home runs with Bobby Petrino and Charlie Strong.  Coach Petrino took us to new heights and Charlie Strong has everything going in the right direction. 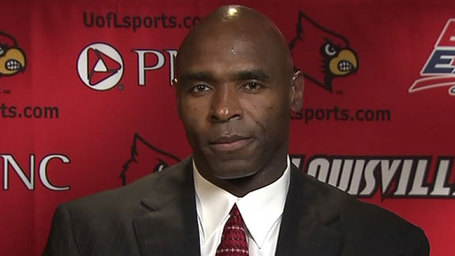 --Wouldn’t be a kicker’s blog if I didn’t mention what happened last week to Kyle Brotzman and the Boise State Broncos.  I was in North Carolina for Thanksgiving with my family and didn’t stay up late to watch the end of the game.  The next morning I went downstairs and my dad and uncle told me that Boise lost.  I couldn’t believe they had lost and that was before they told me how it ended.  As a former kicker my heart went out to Kyle and his family.  No kicks are ever "gimmies," and I tried to put myself in his shoes.  It is a shame that he will be remembered for those two misses.  He has had an incredible career at Boise State and last Friday night was a reminder that even though sports are great, they can sometimes be a nightmare.

With the bowl game coming up I thought I would recap all of the bowl games I went too, starting with the 2003 GMAC Bowl.

First, I want to talk about the importance of bowl games and what they mean to the program.  Bowl games are rewards for a season well done and can be used as a springboard into the offseason.

Recruiting – The coaches will use the extra weeks in December to get recruits on campus and show them what the program is all about.  We had some of our biggest recruiting weekends in preparation for bowl games.  This gives a chance for the recruits (who during the season will come in on a Friday and catch a game on Saturday) better access to what goes on inside the football program.  For instance, a whole group of recruits and player hosts would be able to go out to eat on the Friday of the recruiting weekend.  We would always have a practice that Saturday morning and the recruits and recruits' families would be able to see how we conduct meetings, watch us practice, and get more interaction with the team.  I also enjoyed these practices because the coaches were always a little nicer than usual.    The players, who do the best job of recruiting and making the kids feel comfortable, get to spend more time with the recruits, which is a huge advantage because they get to see what kind of program they are coming into.  This is something that just can’t be done during the season or during January.

Player Development- I have said this before and this is probably the biggest reason why bowl games are crucial.  The young guys get more coaching and get better prepared for spring ball.  Each week during the season the young guys who are redshirting or not receiving a lot of playing time get lost in the shuffle.  There is only so much to prepare for a week's opponent, and for a lot of guys the result of that is very few practice reps.  The bowl practices give them a chance to shine.  We would end almost all of our bowl practices with a young guys scrimmage, which was always a lot of fun.  It is almost like a second spring ball session.  For all of the guys who redshirt it is also a chance to travel with the team and get the chance to see what it is like to go on the road.

Time - The last reason is because you get to spend more time together as a team.  Nobody wants the season to end in November, so getting a bit more time to be a team and go out on your own terms is really special.

Before going into the 2003 game, let’s back it up a year and go back to the 2002 game, which I was not a part of.  Since I was not a part of this, I went to Stefan Lefors (who is in line to get my MVP Award for helping me out with many aspects of my blogs) to get his thoughts on the game.

"There really wasn't much good that came from that game," Stefan said. "I remember Byron Leftwich tearing us up while wearing Air Jordan basketball shoes on the field. He had a gimpy foot and even had his offensive lineman carry him down the field after long completions." 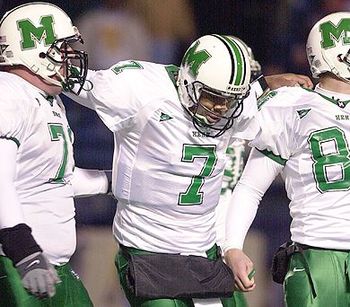 "The news leaked about John L Smith in the 2nd quarter when some of the redshirt players who were dressed in street clothes on the sidelines were getting information on their cell phones. It was on everyone's minds during the rest of the game. Afterward, John L apologized for how everything came out but there was a lot of uncertainty in the locker room about what the future would hold."
I remember talking to some of the linemen during my freshman year about how they felt, and one of the older players on the D-Line said that during the 2nd quarter one of the Marshall players had said: "Hey man, sorry to hear about y'alls coach." He had no idea what the Marshall player was talking about until halftime. Gotta love technology.

-After going 9-3, we were chosen to head to Mobile, AL as Conference USA’s representative for the GMAC Bowl once again.  Here are some memories of everything leading up to the game:

-During the week leading up to departing for Mobile, the kickers, led by senior Nate Smith, decided to stage the Kicker Olympics.

Nate was in charge of the competition between freshman kicker Rob Zarrilli (who later went on to have an All-American career at Hofstra) and senior punter Wade Tydlacka.  The rest of the specialists were judges and represented different countries (we even had shirts made up with the flags of the specific countries on them).  We decided to go with a decathlon, and no stone was left unturned.

We had an opening ceremony - complete with an official program - which started with a weigh-in and smack-talking contest. There were ten events (40-yard dash, obstacle course, quarterback challenge, kicking challenge, etc.) Everything was filmed (if the team was in the stadium, the specialists would go to another practice field to do the decathlon).  A lot our teammates found out what we were up to and after practice they would ask what had happened at that day’s events.  It came down to a tiebreaker which consisted of soccer penalty kicks done out at the intramural fields.

Wade Tydlacka won the first and only kicker decathlon.  The video exists somewhere because I have seen it and it is one of the funniest events ever captured on film.  If I ever get a hold of it we will figure out a way to post it to Card Chronicle.

-Before heading out, the team got to attend the Louisville-Florida basketball game where the Cardinals upset the #1 ranked Gators.  However, I did not get to attend because all of the graduate assistants, redshirt freshmen, walk-ons, and young guys had to bus down to Mobile and it left early that Saturday morning.

We got to Mobile around the same time as the rest of the team was arriving.  We stayed at the Adams Mark Hotel in downtown Mobile, and the only thing I remember was that there was absolutely nothing to do.   We would walk in what seemed like a ghost town at night to this one sports bar to get food and drinks.  We literally could have had almost all of our team meetings at this fine establishment.  There was no curfew the first night and almost the whole team took advantage of it.  Everyone was out until the wee hours of the morning.

-Brandon Sharpe’s tattoo disaster.  At one of Mobile’s finest tattoo establishments, one of my favorite teammates got a tattoo that didn’t go as planned.  Brandon had his back facing away from everyone and he was getting "FLORIDA BOY" tattoo across the top of his back.  The problem was that nobody could see what was going on, and apparently the tattoo artist had some trouble with the proper spelling of "Florida."  When Brandon was finished, he turned around to show everyone, and a particularly astute Cardinal quickly made the observation that it was misspelled.  Instead of "FLORIDA," it was spelled "FLORDIA."  Huge mistake, and one that is not readily fixable.  Brandon was furious.  The artist eventually doctored it up by tattooing the outline of the state around Florida.  At the time it wasn’t funny, but looking back it's hilarious.

-Some of our practices in Mobile were disrupted by the fact that a lot of players were taking finals during the week, especially a lot of the seniors who were in their final classes at U of L.

-The hotel’s hospitality suite had two of the best staples of the collegiate athletes' diet at our disposal.  There was an all you could eat nacho station and a freezer stockpiled with a never-ending amount of all kinds of ice cream bars.  It was a huge hit among the players.

-Wade Tydlacka brought his playstation down on the trip (which a lot of players did), and the specialists spent a lot of time playing NCAA Football and eating ice cream bars.  Nate Smith wasn’t a big fan of video games, but really enjoyed playing the rugby game from EA Sports.  Nate was probably one of the best athletes on the football team and was intrigued by the game of Rugby so much that he eventually started to play the actual game.  He was a natural and has played on the USA Rugby team for a few years.  Who said video games were useless?

-Ben Roethlisberger was pretty good and kept up the tradition of the All-World MAC quarterbacks facing us in the postseason. Watching him warm-up before the game was impressive.  He was throwing sixty-yard ropes with ease, and just by watching you could tell he had a NFL arm.  He played a great game that night in what would be his last collegiate game at Miami of Ohio.

-Miami of Ohio got the win 49-28 but it wasn’t without a bunch of big plays from the Cardinals.  J.R. Russell had three touchdowns, including one he caught from Michael Bush.  Lionel Gates ran for 134 yards and a touchdown, while Stefan Lefors battled to keep us in it.  I asked Stefan about the game and he said, "I had my best juke move ever on a safety but then I separated my shoulder on the same play.  I tried to play through it but probably shouldn’t have."

-Even though losing that game was disappointing, it left a lot of us optimistic about what the next year would hold with so many great players coming back.  I had a great time in Mobile.