Apologies for the lame start to Rivalry Week. I was involved in a fairly nasty wreck this morning and the resulting fun has occupied most of the day.

Long story short: Kristin Cavalier is dead, I'm super sore, and the uninsured driver who blew through a stop sign on Vine Street has tainted my Winter Break just a tad. 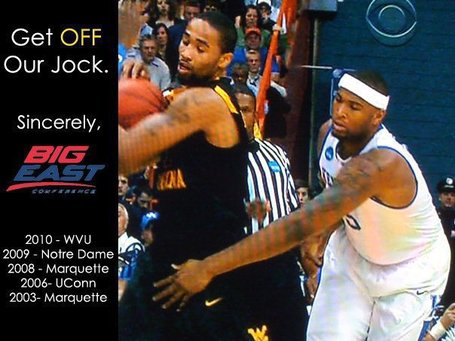 Basketball you have to appreciate, but can never really enjoy. The Pianist of Division 1 hoops.

A final tune-up for BAL before the season-finale against their in-state arch-rival on Dec. 31. After that, the Academy turns its attention to its real season, which begins in late May.

A cool story this week as Albany's head coach offered Xavier's leading scorer Mark Lyons, who was snowed in while visiting his home in New York, a ride on the team bus back to Cincinnati.

The downside to conference play starting is that these games are starting too.

This is your night, ACC fans. Get all your chest-thumping out before the new year.

Bryce Cotton is practically 1/5 Cardinal, which means Providence has a significantly better chance of pulling this upset than the rest of the nation realizes.

The Big West and my sleep timer begin their on-and-off three-month relationship.