Keys to victory in the Beef O'Brady's Bowl

Share All sharing options for: Keys to victory in the Beef O'Brady's Bowl

Powell needs just 100 yards to set the Louisville single-season rushing record, and he'll be the most talented specialty position player on the field this evening. He has 1,330 yards in 11 games this year, which is good for ninth-best in the country. Powell’s 6.3 yards per carry average is best among D-1 running backs.

The Golden Eagles' front seven held six opponents to fewer than 100 yards, but South Carolina, UAB and Tulsa were all able to rumble for at least 200 yards and four touchdowns. Despite a few bad games, when USM is good against the run, it's very good. Opponents are averaging a fairly modest 133.3 ypg on the ground against the Golden Eagles, and just 3.6 yards per carry. Second team All-C-USA linemen Anthony Gray and Cordarro Law lead the charge up front.
Louisville rushed for 212 yards in its six wins and 149 yards in its six losses.

2. Southern Miss' short pass game against Louisville's blitz attack
The best way to attack a blitzing defense is with short passes and quick screens. This something USM and All-conference QB Austin Davis do very well.
Davis keeps Southern Miss in games by not making mistakes. He completed over 60 percent of his throws this season and have averaged an impressive 241.5 ypg by putting his receivers in the best position to make a play. He has thrown for 18 touchdowns and has just six interceptions. Davis loves to look for tight end Johdrick Morris, a first team All-C-USA selection. Morris led the team with 46 receptions for 663 yards. Speedster Kelvin Bolden is the top threat to bust a big play, and accounted for six of Southern Miss' 18 TD receptions.
The offense most comparable to Southern Miss' that Louisville has seen is Syracuse. The main difference is that Austin Davis is much better than Ryan Nassib. The Orange killed Louisville with short passes and screens in the first half, but the Cards nearly pitched a shutout in the second half after some adjustments during the break. 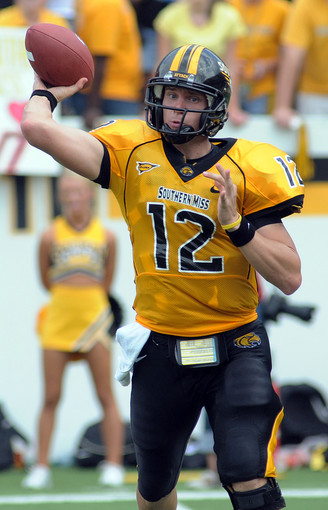 Bedford's not going to let up on the blitzing, so Cardinal linebackers and defensive backs are going to have to make some solo tackles in space in order to avoid big plays.
3. Justin Burke/Adam Froman hitting open receivers
The USM secondary is horrendous. They've been lit up to the tune of 248.1 ypg and 26 touchdowns this season. They're habit of taking unnecessary risks has, however, resulted in a whopping 17 interceptions.
What this means is that Justin Burke (or Adam Froman) are going to have open guys. They just have to hit them. They also have to avoid making the types of silly throws that can lead to jumped routes and TAINTs.
Both quarterbacks have proven themselves capable of hitting open receivers, missing open receivers, avoiding the big mistake, and making the big mistake. Though Powell, Wright, Anderson and company figure to get a healthy workout, Good Jusdam Burkman has to make an appearance for U of L to secure beef supremacy.
4. Southern Mississippi's special teams edge
Louisville's special teams have been a cause for concern all season. The same can't be said for their opponents Tuesday night.
Danny Hrapmann has buried 26-of-30 field goal attempts, has hit two from over 50-yards, and is a Lou Groza Award finalist. Louisville's struggles in kick coverage have been well documented, which bodes well for Golden eagle return man Reggie Hunt, who is averaging 28.6 yards per return.
Both teams have covered punts well, but each has been susceptible to big kick returns. Game face, Jeremy.
5. The lay off
Both teams wrapped up their seasons three weeks ago, but the break has likely been more beneficial to Louisville, whose starting quarterback and running back (Burke/Froman/Powell) were dealing with injuries. Also, Charlie Strong and his staff are decent.
6. The Cardinal rush defense
Despite limiting opponents to less than 20 ppg, the Louisville rush defense has been very good at times and not so good at times. It all shakes out to an opposing rush average of 142.2 ypg.
Southern Miss averaged 227.6 yards on the ground in its wins and only 155 in its losses. Like Louisville, the Golden Eagles are extremely deep in the backfield. Freshman Kendrick Hardy is the feature back and has rushed for 855 yards and seven touchdowns, Desmond Johnson also has seven scores to go along with 509 yards, and QB Austin Davis has carried for 436 yards and a team-leading 10 touchdowns. Over the course of his career, USM is 7-1 in games where Davis rushes for more than 50 yards.
7. The Titus Teague jersey
We all know the history. But all that was before this: 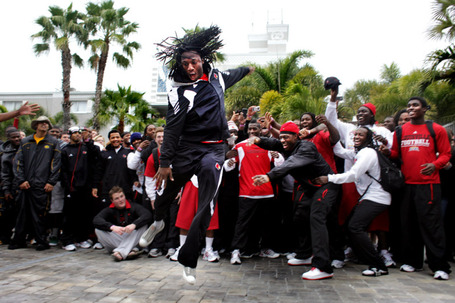