Share All sharing options for: Five reasons you should hate Southern Miss

There was a time when Southern Miss was THE rival for Louisville football, and the programs despised each other. That time ended the moment U of L accepted a bid to join the Big East conference and will likely never return.

Still, all it took was a hotly-contested dance-off for some of those old feelings to resurface. 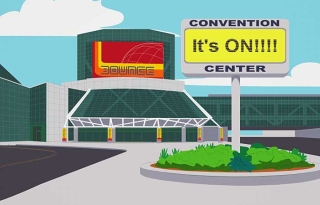 Since the bad blood is back (at least for the day), let's look at the top five reasons why we hate Southern Mississippi.

5. They Still Hate Us

And honestly it's kind of hard to blame them. The Golden Eagles dominated Louisville and maintained a vastly superior program for the bulk of the "rivalry." The Cards have won four straight but still trail the all-time series, 18-9-1. And yet U of L gets hot in the 2000's and just like that gets the opportunity to bolt for the Big East, leaving Southern Miss behind to plod along in a conference that all but guaranteed program regression.

It's much easier to hold onto hatred for Louisville than to develop new hatred for UAB.

The first Louisville football game I attended was against Southern Miss. We lost and I got beer spilled on me. The first time I remember being really upset over a Louisville football game was the Brett Favre hail mary. If you were older than five and in attendance then I'm sure it hurt you even more than me. Basically, Southern Miss brought out the worst in life from '89-'99.

In the 1998-1999 regular season-finale for both teams, Reed drilled a three from the left-side of the arc with no time remaining to lift hapless Southern Miss to a 59-58 victory over the visiting Cardinals. The loss cost U of L a share of the C-USA regular season title, and cost Denny Crum a $15,000 bonus. It also sent my dad out on a solo car ride to calm down.

He might be the most annoying person alive, he makes ESPN unwatchable, he makes Dina from Salute Your Shorts seem selfless, he's a celebrates sexual deviant, and he went to Southern Miss.

If we're talking about worst Cardinal losses from a pure anger/frustration standpoint, then this has to be top five. The C-USA championship - which would have been Louisville's first - was on the line, and the game was as hard-fought as any I can remember. Tied at 27 with a little over two minutes to play, the Golden Eagles lined up to punt but ran a successful fake which immediately sparked a still on-going debate over the play's legality.