Jody Demling caught up with Louisville quarterback commit DaMarcus Smith this afternoon to talk about the commitment of fellow Elite 11 QB Teddy Bridgewater. Despite being "a little shaken" by the news, Smith says he's "still committed" to U of L. 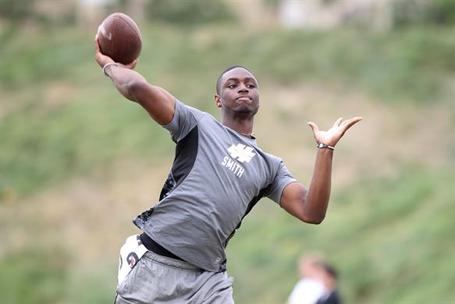 "Deep down in my heart, Louisville is where I want to be. I can’t just make a decision based on emotion because someone else said they are coming there. I look forward to the competition."

"I am a competitor and deep down in my heart I know I am the best and I just have to keep working hard and try to come on there and prove it."

"(Enrolling in January) is still the plan right now."

It sounds to me like starting at Louisville is still Smith's dream scenario, but he's at least going to entertain the thought of a better situation somewhere else. In your humble narrator's opinion, Oregon is the only school to be worried about.

It's a tough call for a loyal kid who is one of the two or three most talented quarterbacks to come out of the city in the last decade. I wouldn't be surprised at all if he ends up as U of L's starter from day one, and I hope that's still his goal a few weeks from now.