Teddy Bridgewater and Eli Rogers have committed to Louisville

Share All sharing options for: Teddy Bridgewater and Eli Rogers have committed to Louisville

It took Charlie Strong just over a year to produce perhaps the biggest piece of recruiting news in the history of Louisville football.

Five-star Miami Northwestern quarterback Teddy Bridgewater has verbally committed to play football for the Louisville Cardinals. He is the highest-ranked signal caller (No.2/No.3) to ever commit to U of L, a program with a rich history at the quarterback position. 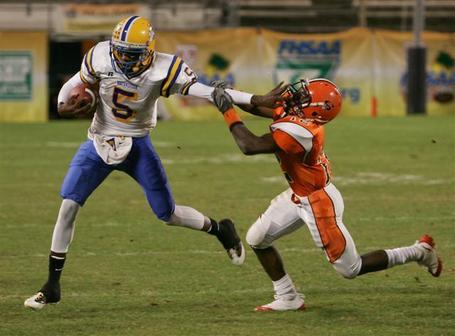 Coming with Bridgewater is teammate and best friend Eli Rogers, a three-star receiver who was headed to Miami before head coach Randy Shannon was fired. In any other year (or on any other day, really), the commitment of Rogers alone would be more than enough to induce below-the-waist clothes-shedding.

There have been serious rumblings about this for almost two weeks now, but to actually hear that it's official is almost surreal. This is program-changing news regardless of how either player's career at Louisville pans out.