For a comparison of Louisville's special 2010 soccer season, one can simply turn the page back to last year. The Akron Zips reached the 2009 College Cup Final without a single loss on their resume. After playing Virginia to a 0-0 tie in regulation and two overtimes, Akron would end up losing on penalty kicks. One of the most heartbreaking ways to lose a championship game in any sport at any level.

So you can assume the Zips will have extra motivation this afternoon. They come into the 2010 College Cup Final with a 21-1-2 record and lost in regulation only once in their last 49 matches. Additionally, Akron has not lost a game since 2006 when scoring two goals (67-0-1). They'd gladly give up all of these accolades to win this afternoon. A victory would bring home the first team national championship in University of Akron's history.

The Zips would have to get past an undefeated Cardinals side first. As anyone whose followed Louisville soccer this year can tell you, head coach Ken Lolla helped build his opponent's program. Lolla spent 13 years coaching Akron, took them to six NCAA tournaments and laid the foundation for the success they're enjoying today. The Zips will wait until after the match to thank him.

Expect a very evenly played contest today between the only two teams who held the NCAA #1 ranking this season. The two sides also share similar styles of play. Both like to attack the outside lanes in midfield to open up the mixer in front of goal for crosses and through balls. They have skilled defenders who join the attack and while both team's defenders are content to possess the ball, they love to move the ball forward with accurate long-balls to charging forwards.

In individual terms, Akron boasts a bevy of dangerous scorers. Keep an eye on jerseys' #9 (midfielder Michael Nanchoff), #10 (Anthony Ampaipitakwong) and #11 (forward Darren Mattocks) while the Zips are on the attack. They along with MAC Hermann Trophy finalist, #6 Darlington Nagbe (junior forward) will give the Cards the most trouble on the ball. Nagbe in particular is very explosive. The junior forward can dribble at full speed, turn on a dime and distributes the ball as well as any forward in college soccer.

For Louisville, the difference in today's match will be Colin Rolfe. He will be targeted by Akron's defense but that's nothing new for the All-American and MAC Hermann Trophy finalist.

If Rolfe can create scoring opportunities early on like he's done all season, the Cards can build a lead and put Akron on their heels. Neither team will fold but Louisville wants to set the tone early and a goal in the first 10 minutes would be huge. Louisville's strength is just that--they're very strong on the ball and will challenge Akron physically in the midfield and on defense.

And I'd be an idiot (again) if I didn't mention Louisville super-sub Aaron Horton. The freshman forward has scored back-to-back last minute game-winners in the College Cup and if today's game is tied late, there's no question who Lolla wants on the field. 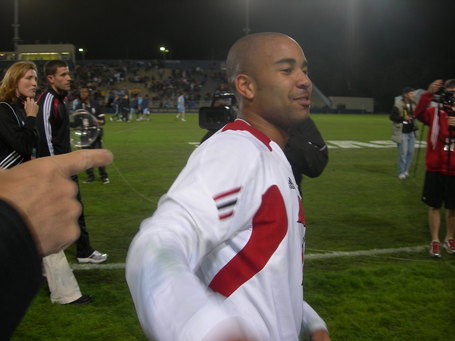 Two teams. One goal. The Collision Course to the men's soccer National Championship ends today. Ken Lolla; "It's the destination. It's the final step."