Redshirt freshman Jeremy Wright has been named the Big East's Offensive Player of the Week.

Helping to fill in for the injured Bilal Powell, Wright rushed for a career-high 98 yards on 19 carries with two touchdowns in the Louisville's 28-20 win at Syracuse on Saturday. He found the endzone on a run of 28-yards and the first quarter, and a run of 12-yards in the third. 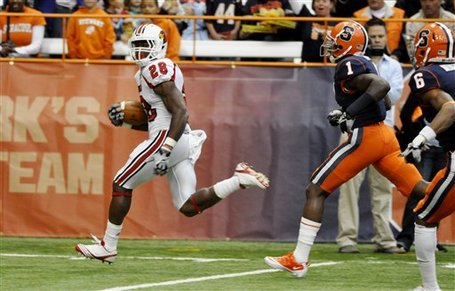 Freshman safety Hakeem Smith was named to the honor roll for a second straight week after notching a career-high 13 tackles (11 solo) against the Orange.

Poor Bilal. Leads the Big East in rushing and has gone for over 200 yards twice, but no OPOW trophies to show for it.