I saw earlier this week that someone had posted about the WVU game from 2006. I just want to add that this was easily my favorite game from my Cardinal football career. It was the kind of game that you dream about playing when you're a little boy. Two top 5 teams meeting on national television with a lot on the line.

It was a cold night in November and the stadium and town were absolutely electric. The game featured everything from Trent Guy taking the punt back, Brian Brohm throwing the fade to Mario, the defense stepping up, to the lights going out for a semi black out. The feeling I had when the clock hit 0:00 was awesome. It was a night I will never forget. I could go on and on but I have to continue with my obligations to Mike of writing about the quarterbacks during my time there.

Continuing with my thoughts on quarterbacks, I'll turn my attention this week to Hunter Cantwell.

I had some stories lined up, but yesterday decided I would turn to Hunter for this one. After leaving a message he called me back and we talked about his favorite memory at Louisville, along with some lighter stories.

The best backup quarterback in the country was what we called him, and it was true. Hunter was an integral part to our championship team in 2006. He filled in when Brian got hurt against Miami and kept everything rolling, and then led us to two road wins against Kansas State and Middle Tennessee State. Just like a closer in baseball, Hunter was there when we needed him.

After a great high school career in Paducah, nobody wanted him at the next level. The best chance for him to walk-on was at Louisville, which just so happened to have the nation's best high school QB coming in at the same time. I don't think a lot of people would have made the same decision that Hunter did, but he recognized the opportunity and made the most of it.

Watching Hunter play was really just like watching a kid in the backyard having fun. After his success backing up Brian Brohm in 2005 and 2006, a lot of players would have transferred to get more playing time. Hunter stayed the course, opting to stick with the team that gave him a chance.

My favorite on field moment of Hunters was him endearing himself to Cardinal fans everywhere with his performance in the 2006 Gator Bowl. Facing one of the top defenses in the country in Virginia Tech, Hunter took shot after shot after shot and continued to get back up. At one point his nose was bleeding from both nostrils and he looked like he had just gotten out of a boxing ring. Even though we suffered a disappointing loss, you had to remember that a walk-on red shirt-freshman quarterback had almost led us to the Gator Bowl victory. It was a gutsy performance that earned the respect from not only all his teammates, but from people across the nation.

I asked Hunter what his favorite memory of his time at Louisville was, and without hesitation he said Miami stomping on the bird in 2006. Hunter explained to me that it was an assistant coach on the Miami sideline that gave him extra motivation. I got pumped up just listening to Hunter tell me this story.

Coming out of high school, the head coach at Murray State told Hunter that he just wasn't good enough to get a scholarship, but that they would consider him if he wanted to walk on. During pre-game warm-ups, Hunter was throwing the ball with some of the other QB's when he saw a familiar face on the other side of the field. This old head coach was now the tight ends coach at Miami after having been fired by the Racers. Hunter said that he started thinking about that day when Murray State passed him over and thought to himself, "I mean Murray State!! According to this guy I wasn't good enough to play at Murray State."

Sure enough, after an unfortunate injury to Brian at the beginning of the third quarter, Hunter got his chance to play. Up 17-7 at the time, the game was still in doubt. 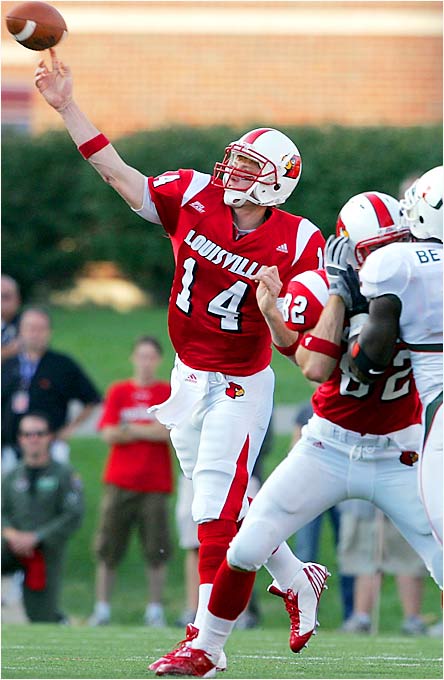 "I got the play from Coach Petrino and went in the game," Hunter said. "He called a passing play, Harry ran the post to perfection, and I just let it rip for a big completion down near the goal line. I just remember glancing over to the Miami sideline and staring at that coach, I know he saw me looking at him. I thought to myself, yeah, I am not good enough to play at Murray State! To be in that game against Miami and to help us get a win meant a lot to me. That whole game, from the start, to celebrating with the fans afterward is something that I will always remember."

Hunter finished that game 3 for 4 with 113 yards passing and 1 TD. He helped put the finishing touch on a huge win for the football program.

I had fun reminiscing with Hunter on some of our off the field memories. Without further explanation, here are a few that made the cut.

Art: "Why are you rollerblading all over the place when it is so cold outside?"

Hunter: "My truck is in West Virginia."

Hunter: "Yeah, me and my cousin went to snow ski in West Virginia last weekend and my engine blew out. It is getting fixed in Elkins, WV."

Art "So when are you going to get your truck"

Hunter: "I don't know. They said a few weeks to fix it so I figure we will go back soon for more skiing and I'll just get it then. I've got the blades for now and figure I can mooch some rides every now and then. No big deal."

During my senior year I had the privilege/misfortune of sitting in the same row on the airplane with Hunter and Matt Simms.

On plane rides I usually just liked to put in my headphones and try to get a nap in. That wasn't happening on Hunter's watch. Anytime I would try to go to sleep, Hunter would flip my tray table down and slam it against my legs. He would do the same to Matt and then it would just turn into a game. The most excited I think I saw Hunter during the road trips was when he got to meet the 40-year-old stewardess who was in the pre-flight safety video (which Hunter was a big fan of, he looked forward to that video every time because of the terrible acting). She was walking down the aisle and Hunter asked, "Are you the lady from the video?" She nodded and Hunter turned to Matt and I and excitedly said, "I knew it!! This makes my whole trip!!" 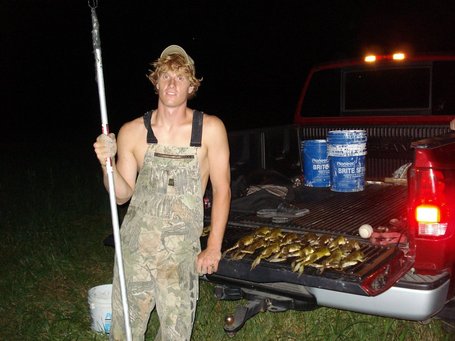 After the Kansas State game we were sitting around our lockers when Hunter and the quarterbacks came down following their film meeting with Coach Petrino. Hunter looked exhausted. He then started laughing and said, "well, I thought I had played pretty well until Coach Petrino started talking."

Apparently Coach P had dissected every one of his reads and throws and hammered him in the film review. I asked Hunter if he remembered this and he did and referred back to one play in the 4th quarter in particular.

"After starting the game hot we hadn't moved the ball as well as Coach would have liked and he was getting on me pretty good," he said. "He called a timeout and called a naked bootleg and gave me specific instructions to throw it to Scott Kuhn. He said that Scott would be open, but in case he isn't just throw it out of bounds and don't take a sack. I got back to the huddle, called the play, and then Harry said, 'throw me the ball on this one Hunter, I got it.' I thought about what Coach said and then thought 'why not,' I am going to throw him the ball.

"I rolled out and Scott was open. Harry had a step on his man but wasn't as open as I would have liked. Still, I threaded one in there and he made a great play down the field. During the film, Coach Petrino was cussing and yelling at me play after play, throw after throw. I was getting really nervous about this naked bootleg play but when it came up Coach Petrino just said 'nice throw,' and went on to the next one."

During August training camp in 2006, the kickers and quarterbacks drew up an elaborate plan to catch the opening of Talladega Nights starting Will Ferrell (ULKPA gave it four stars). During camp, we didn't have a whole lot of time to work with since our days consisted of meetings, practice, weight lifting, and more meetings.

Since the kickers didn't have position meetings, we would get the tickets for the movie for everyone before the afternoon practice and then we would save them seats at the theater so they could get there right before the previews started. It was a foolproof plan and worked to perfection. Everyone made it on time except for Brian Brohm. The theater was packed and the previews were going on so everyone was quiet. Brian came walking in and as soon as he saw him Hunter yelled really loud, "Hey Everyone it's Brian Brohm!!!!!!" Everyone started looking and whispering. It was hilarious.

Hunter and backup QB Bill Ashburn missing the bus for the 2007 home game against Pittsburgh.

I usually sat next to one of the quarterbacks on the bus, whether it was Bill Ashburn, Hunter, or Tyler Wolfe. As the bus started pulling away for the game, I realized that Bill and Hunter weren't on the bus. I figured they might have gone to the stadium early for some reason, and just assumed there had to be a good explanation for it.

Turns out, Hunter and Bill had lost their game itinerary and came down to the back of the hotel after we had all left. They apparently spent several minutes trying to figure out if they were really early or really late. After realizing that they were late, Bill went over every possible way to get to the stadium: whether they would call a cab, get a ride from someone, ask the hotel shuttle, etc. Hunter stopped him and said, "let's just run over there, the football stadium is only like 500 yards away."

So they took off running down the street to the stadium.

"Here we are, two football players running after the buses," Hunter said. "We were running through fans, past tailgate spots...people were looking at us really funny."

I remember sitting in the training room getting my plant ankle taped up and Hunter and Bill come walking into the training room out of breath, late as could be. All I could do was shake my head and laugh. The funny thing was that nobody really noticed other than me and the rest of the quarterbacks.

It was great catching up with Hunter. He is doing well. He thought he played well over the summer in Carolina but got cut. He is currently on the Baltimore Ravens practice squad. He got married over the summer to his longtime girlfriend Emily (who is awesome) and they just celebrated their four-month anniversary. I asked Hunter if he had anything he wanted to say to the readers, and this is what he went with:

"Thank you to all the fans for their support over the years. I loved being a Cardinal and it was a special time."

Thanks Hunter for sharing your thoughts and I hope that I was able to portray them to your liking on paper/computer screen.

Let's get a win over the big orange blobs this weekend. Go Cards!!!!