Texas Christian University has accepted an invitation to join the Big East conference in all sports. Brett McMurphy of AOL Fanhouse broke the news this morning.

The Horned Frogs will reportedly leave the Mountain West after next season and start play in the Big East in 2012-13. In a release, the school says it will have "a major announcement involving the TCU athletics program" at 2 p.m. ET on Monday. Mysterious.

It's an understatement to say that is the best case scenario as far as the first step in expanding the league goes. TCU still has an outside shot at winning the national championship this season, and if recent years are any indication, the program figures to remain in solid shape by the time the move happens. In short, the league gets its respectable eight-game conference schedule and does so by adding a perennial top 25 program and emerging player on the national scene.

The bad news: they used to beat us pretty consistently even before they were good.

The other semi-bad news: the basketball conference roster currently stands at the odd number of 17. 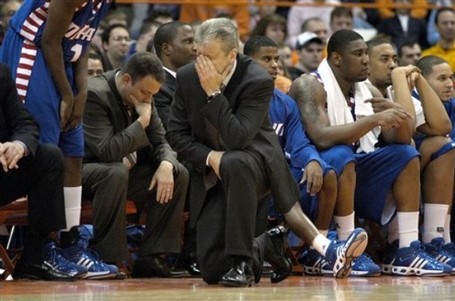 Seriously, I just plugged TCU in for Depaul at No. 16 on my Big East basketball power poll ballot and no one noticed.