The best blogger on the site has already written extensively on the recent history with Rutgers, and I think everyone is pretty much on the same page that Rutgers is our most hated opponent in the Big East, including all Big East opponents in basketball, soccer, field hockey and water polo.  The 2006 game would have been enough, but combine that with the 2008 murdering (that somehow didn't end Steve Kragthorpe's head coaching career) and the obnoxious coach who really screwed up by not taking the Miami job when he had the chance and coaches like he realizes it, there is nothing redeeming about Rutgers.  Not even that they put the nail in the Koffin last year in front of dozens of people and a few hundred television viewers in a game I have no memory of and no idea what happened in because I didn't see live, see any highlights, read any written accounts of or even checked the game summary/box score until right now.

From that, I learned that Darius Ashley was our leading rusher and that Trent Guy had 2 runs for 3 total yards.  Moving on.

At 4-6, 1-4, Rutgers actually does have something to play for, but with a road trip to Morgantown next week, even the most diehard Rutgers fans (all both of them) can probably see the writing on the wall.  At least I hope they do: I can't imagine the 11 AM day after Thanksgiving crowd for this game will be anything like night games in 2006 and 2008.  Especially with a low-50s, rainy forecast.

Conversely, the 2010 Cardinal Football Season can be a complete success with a win tomorrow.  After two straight frustrating, close losses, and the seniors having never actually played in a bowl, the Cards will definitely have something to play for.  Rutgers isn't that talented and is coming off a 69-38 beatdown at the hands of Cincinnati, so the emotional edge should be enough to get us over the top.  But, Rutgers always plays us tough and we've never won there.  As I have predicted two wins and we've lost the last two weeks, and obviously my predictive powers negatively affect the outcome of the game, I will likely predict a Rutgers win.   But not before I incorrectly predict...

First Play From Scrimmage: If Powell plays, Powell off left tackle out of the pistol.  Rutgers run defense is average, ranking 55th in the country and 7th in the Big East, and after last week's struggles, look for the offensive line to try to get the game started off right.

Second Play From Scrimmage:  Rutgers's passing defense is worse than the run defense.  At 75th in the country and 7th in the Big East, and 92nd/8th in sacks, Burke should have enough time and space to find open guys.  Who should hold on this week.

Defensive MVP:  Johnny Patrick.  Rutgers rushing offense is terrible, and if Schiano has watched any game tape I'm sure he's learned that our passing defense is the weakest link.  Rutgers ranks 112th nationally in rushing and splits carries among a couple guys, including back-up/WildKnight QB Mohamed Sanu.  So look for Rutgers to throw, throw, throw, and look for Patrick (who was there for the 2008 game, and I'm sure remembers that feeling) to make a difference.

Offensive MVP:  Justin Burke.  Senior year, season on the line, bowl game available, rough week last week and smart enough to know how big of a scape goat he will be if this season ends 5-7 under his watch, look for Burke to take advantage of the time, Powell and Wright's running game success and some well-timed play action to have a big game.

Specific Vision:  Rutgers tries TWO trick plays in the first quarter, one of which works for a long gain and one of which results in a turnover or huge loss and/or crushing hit by Brandon Heath. 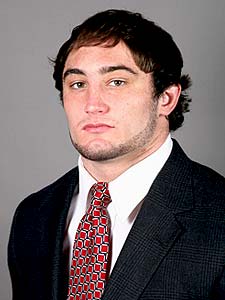 This guy had an assisted sack two games ago.  And one against Norfolk State.  Sure, he had two last week against Cincinnati, but if he gets one tomorrow, he will celebrate like he just won the Super Bowl and you will shout at your TV.

Show Us The Arm, Son?  All season has been leading up to this game and this play.  At some point in the second half, with the game still in doubt, Sanford and Strong will show some real courage and call a throw back from Burke to Brown, who will throw down field.  Last week saw the first hand-off out of the WildCard (which resulted in no gain/small loss, so maybe that's why we haven't run it all year....) so maybe this week will see the first real trick play involving Brown throwing it.

Put it this way: if the only real trick play we run all season was the TD pass to Chichester in a Memphis game we were going to win by 6 touchdowns anyway, a huge opportunity will have passed us by.  And you should listen to me on this, because Art Carmody may have actually said that he generally enjoyed my stuff, and would appreciate a ride next time.

Final Score:  I'm going to use up all my reverse jinx karmic powers on this one.  Rutgers 24 - 21 Louisville.  Just to make sure I don't get my hopes up, the season ends in crushing fashion as Rutgers scores two TDs on trick plays, Burke looks shaky and Powell can't get it going.

One game playoff, a season with improvement each game and the future of the program on the line.  Against a somewhat talented team and in front of a few thousand cold, wet New Jersians, neither of whom really care about the outcome.  This is what we have worked so hard all year for.  This is what we live for.  In the immortal words of @ULismyhothot, leggo.