Share All sharing options for: Rodney Purvis wraps up visit to Louisville

Rodney Purvis, the 2012 prospect who Jerry Meyer calls "one of the best scoring guards I've scouted in the eight years I've been doing this," just wrapped up his Louisville visit and told Jody Demling that it was "wonderful."

Purvis, who is currently averaging 34.3 ppg as a junior for Upper Room Christian (N.C.), posted the following picture this afternoon: 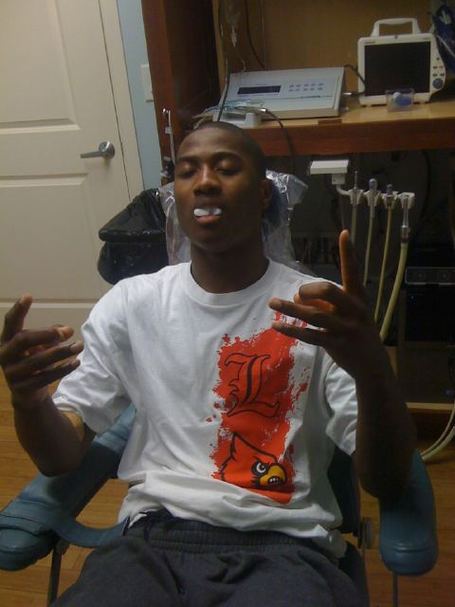 Loving it here.. about 23 hours ago via HTC Peep

Great conversation with Coach P. about 19 hours ago via Twitter for iPhone

Great win for the Cards ! about 15 hours ago via Twitter for iPhone

Shouts out to all Cardinal fans and their amazing student section !! about 8 hours ago via Twitter for iPhone

I think we've all learned that getting excited about things of this nature is foolish, but it's still nice to know that U of L is in good standing at this juncture. It's also promising that Purvis has a solid relationship with Tim Fuller.

ESPN is the only scouting service which has him ranked post-reclassification, and they have him as the second-best shooting guard and No. 7 overall.

Bottom Line:
Purvis is a wing scorer that can get to the rim from anywhere on the floor and finish through contact. He is aggressive and plays in attack mode on both ends. He also has very good all around skill in the areas of ball handling and passing. Purvis is very talented and is productive on a consistent basis. Purvis is fun to watch and as he brings toughness and competitiveness to the floor each and every time out.