NOTE: Tonight's game can only be seen on ESPN3.com. Yes, they're doing it for basketball, too. Bitch below, I won't mind.

Notes on the Mocs:

--Chattanooga is coming off of a buzzer-beating victory over Marshall.

"I think I've got broken ribs because when we were celebrating, somebody on the team caught me square," coach John Shulman said Sunday. "But I can still play. I can carry the play-sheet, so I'm OK."

Shulman and the Mocs approached the second half, and especially the final minutes, as if it were a SoCon title game. They won, and their reward is Louisville tonight in the KFC Yum! Center.

"It's a foreshadowing thing," said guard Ricky Taylor, who had six points Saturday. "It's like we won the SoCon last night and we've got Louisville next. It's going to help us in the long run and for future reference."

--Chattanooga has made five or more three-pointers in 29 straight games. That's the fourth longest active streak in the nation. VMI has the longest with 73 consecutive contests heading into the weekend. (Credit UofL communications with an assist on this note.)

--The Mocs played in back-to-back-to-back nip-and-tuck battles losing on a final-possession three from Austin Peay at home, and pulling out a four-point come-from-behind win at Kennesaw State. UTC came back from eight down to win at Marshall. In the Govs game, there were seven ties and 12 lead changes. In the second half alone at KSU, the score was ties eight times and the lead changed hands three times, while there were five ties and eight lead changes at Marshall.

--Chattanooga has been phenomenal in the last five minutes of games this season. The Mocs have out-scored opponents 45-27 during that period over four games.

--Dontay Hampton's play has been pivotal in the back-to-back wins for Chattanooga. He's played 23 minutes off the bench when Bell's gotten in foul trouble. In 23 minutes of the two games, the walk-on redshirt sophomore has 10 points, two rebounds, two assists and three steals. His defense has been a difference-maker off the bench. 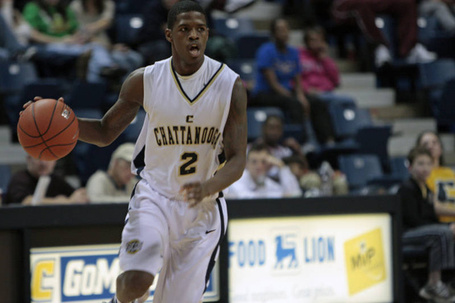 --Hampton's play is a great example of the depth of this year's Mocs squad. Chattanooga's reserves have out-scored opponent benches 92-63, an average of 7.3 points per game. Over the last three games, the Mocs' bench has a 77-36 advantage, +13.0 scoring margin.

--Bell is off to a strong start at the point. He leads the SoCon in assists (5.8/gm) and assist-to-turnover ratio (2.6) with 23 assists against 9 turnovers. In his last two games, he has 13 assists with just one turnover.