There's really not much to say other than that this was a talent loss, pure and simple. If the final score had been based on want and heart, we win by a couple of scores. Sadly, this was not the case and Louisville will now play for its postseason life in an environment where it hasn't had a great deal of success.

The mixture of vitriol and disappointment being directed at Justin Burke is something I simply don't understand.

Sure, Burke isn't the caliber of quarterback that Louisville fans are used to, but how is that his fault? Who set such lofty standards for a guy who couldn't beat out a quarterback who drew his fair share of ire during the first 2/3 of this season?

West Virginia's defensive line is one of the best in the country, and U of L's leading rusher on Saturday was its punter. The Cardinals were consistently in positions where the defense knew what type of play was coming, and that's a tough situation for a quarterback with a limited number of tools at his disposal. 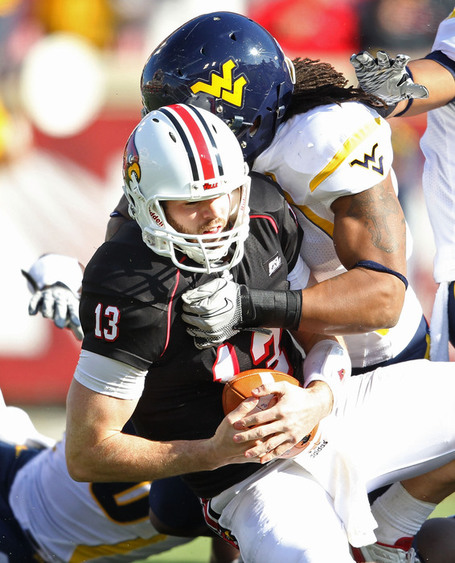 Are Froman/Burke/Stein the type of guys who should be commandeering the offense of a BCS-conference program? No, but that fact shouldn't be held against them.

Collections of angry people will always direct their fury at an individual, if possible, because it's simple. The reason behind Louisville's offensive woes on Saturday is more complex than just Justin Burke or Mike Sanford, but cheap answers to difficult problems generally win out, and this has been the case in the past couple of days.

If you want to pin this one solely on J-Bone, however, I'm OK with that.

Art Carmody made his second CC tailgate of the year (We had one girl when he first arrived...Was I embarrassed? Yes. Did I cry in the port-a-pot? There was a borderline tear) and then sat with us for the second half of the game. When he asked if we had an open seat it took me about two seconds to say yes and three seconds to punt Ms. CC down to the row in front of us. She was good with it.

For those not at the game, Stefan LeFors did the "punt, pass, and kick" thing at halftime, and brought Art in to handle the "kick" aspect of the game. Wearing jeans and boots, the man buried a 40-yarder from the right hash. Had he missed, his final kick in PJCS would have gone from "game-winner on Senior Day" to "blowing money for charity and the Humane Society in front of the second-largest crowd in program history." There was a lot on the line.

We didn't score in second half, effectively dashing my dreams of a Mike/Art jump/hug celebration.

Four final notes on this:

1. Art went to the team hotel before the game and claims he gave Bilal Powell a hug. If there's a photo of this floating around anywhere, I'm willing to dedicate an entire room to it.

2. This big, slightly redneck, older gentleman sitting behind us was hammered ("Had one of them four lokos this morning...shit FUCKED ME UP," was his pregame quote) and spent the entire game bashing players and booing whenever a West Virginia fan was in the area. He had some very over-the-top remarks for Josh Chichester after his drop on 4th down. Art's not cool with this.

If you're ever at a game and thinking about getting overly personal with your remarks toward a U of L player, be aware that you're putting yourself at risk for a left-footed LGAWAC blow to the face.

3. Art went for a fist bump at one point and I had to finagle my fist around his Orange Bowl Championship ring. Really made me second-guess the decision not to wear my summer 2010 softball championship ring.

4. CardsFan922 saw him after the game and reportedly yelled, "keep up the blogging!" If "Carmody's Corner" dies this week, we'll all know who to blame.

The players appeared absolutely devastated after the game, and I'm told the locker room was as depressing a place as it's ever been. When the team came over to the band after the game, not one person was smiling, no one felt like singing the fight song; everyone looked almost dazed. Doug Beaumont stood at the front of the group just staring into the crowd, and then looked like he didn't want to walk off the field when the song was over.

It was hard to watch, especially when you juxtaposed the scene with how animated (the sideline was as lively as I've ever seen it) the entire team was in the game's opening moments.

Kudos to the crowd. No one should complain about that performance. 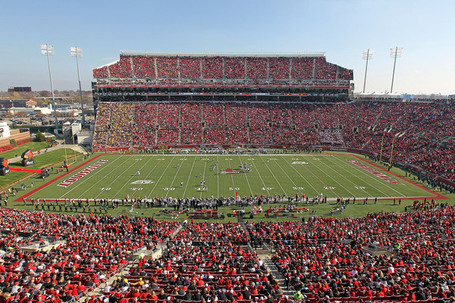 It's truly unbelievable how good our defense has been. I don't even know where to direct individual praise. Johnny Patrick, Dexter Heyman, Rodney Gnat, Mike Evans, Hakeem Smith, Daniel Brown, Brandon Heath; with the exception of one play, everyone was tremendous.

I don't know why the decision to go for it on 4th and 5 is drawing so much ire. It was the second time all half that the offense had gotten the ball across midfield, and the best case scenario if we punt is probably getting the ball in slightly worse position with two and-a-half minutes to work. If Josh Chichester makes a fairly routine catch, then there's zero debate about the call.

The call on 3rd and three to pitch to Jeremy Wright was unfathomable. I think the bashing of Sanford is unjustified considering the lack of weapons he has to play with, but that call deserves any criticism it gets.

The trick play after the fake punt was there, Burke just doesn't have the arm to make the throw. Great pair of calls though.

How about Chris Philpott? A 43-yard field goal, a 73-yard punt and a 23-yard fake punt run where he looked pretty athletic (I'm told he played safety in high school). A certain former kicker was very disappointed that he wasn't named the "true athlete of the game." Evans - with three sacks and our only touchdown - probably deserved it.

I was legitimately sad when they brought Bilal and Doug out before the game. I remember talking to Beaumont's mom during his first practice and wondering just how good he could end up being.

It's a shame that neither were able to give memorable performances in their final home game, but thankfully they get to strap the pads on at least once more.

Cameron Graham is a beast.

So now it comes down to this: one game will essentially decide whether or not this season will go down as a success or be viewed as a "rebuilding season" which hopefully set the program on a direction towards future success.

If Louisville beats Rutgers and this senior class finally gets a taste of the postseason, then regardless of what happens in the bowl game, this year gets chalked up as one big giant win. If the Cards drop yet another heart-breaker in Piscataway, then I think ending the season with three-straight losses, sadly, becomes lasting image of Charlie Strong's inaugural campaign.

There's a lot on the line this Friday. Here's to getting the job done.