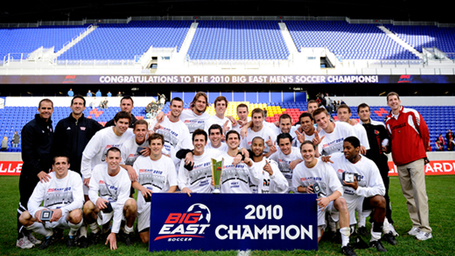 The top ranked Louisville men's soccer team opens up the NCAA Tournament second round as they play host to College of Charleston on Sunday, Nov. 21 at 7:00 p.m. in Cardinal Park. The Cardinals are 1-3-0 in NCAA Tournament games.

Louisville enters the match with 16-0-3 overall record. The Cardinals are coming off winning the BIG EAST Tournament title last Sunday tying Providence 1-1 after double overtime and winning with a 3-2 advantage in penalty kicks. Freshman Dylan Mares leads the team in scoring with eight goals and two assists for 18 points, while All-AmericanColin Rolfe is second on the team with six goals and five assists for 17 points. Junior keeper Andre Boudreaux owns a 0.55 goals against average, allowing only 11 goals on the season with eight shutouts.

College of Charleston enters the match with an 11-4-3 overall record. The Cougars are coming off a 3-2 first round victory over East Tennessee St. in the NCAA Tournament. Sophomore Sean De Silva leads the team in scoring with seven goals and eight assists for 22 points. Freshman keeper Kees Heemskerk owns a 0.91 goals against average, along with 78 saves and six shutouts.

This is the first meeting between Louisville and College of Charleston. Tickets are still available for the game in standing room only for $3 each.