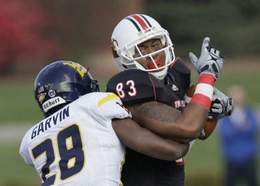 Cameron Graham's outstanding day wasn't enough.  Philpot played the game of his life, the defense did more than enough to win but the offense let us down.  On the post-game, Strong said that Powell had been sick this week and wasn't at full strength.  If I find the guy who sneezed on him or didn't wash his hands before handing Powell's food....

Anyway, can't blame the refs for not scoring but the sequence in the 2nd quarter where the refs missed the obvious block in the back by a WR on a big Smith run (the guy did the old "push the guy in the back then put both hands up in the air like you didn't touch him" routine), not calling grounding (a 50/50 call) and then the horrific awarding of WVU a timeout when the ball was clearly snapped before Smith called timeout AND another ref threw a flag on the playclock.

Last week at the USF game, after we scored and the crowd was really into it, they threw it to J-Bone who introduced YMCA.  USF ran the kick-off back for a TD.  This week, during the timeout that shouldn't have been awarded, they threw it to J-Bone who introduced YMCA.  I even tweeted that something bad was going to happen.  First play back from the timeout?  Noel Devine somehow is wide open and goes 50 yards to set up an easy 2-yard TD run on the  next play.

And Burke.  Obviously I was pretty high profile in my anti-Froman feelings.  Burke had some bad throws today and didn't get protections right, but he was clearly hampered by a lack of running game and predictable passing downs.  And West Virginia does have one of the top defenses in the country.  But still.  Obviously the QB position is a huge weakness this year, and although both the balls to Bellamy and Chichester on the last drive were catchable, Burke had some other terrible throws to open guys.

Ugh.  Next week is huge.  Last week was REALLY huge.  One more chance for a bowl and (more importantly) an extra month of practice for this team that will pay off next year.

The day wasn't a total loss.  I was with a friend who has a close-to-PJCS parking spot.  Usually that's good but we were stuck in the parking lot for about 45 minutes.  But I got to see Art!  He was walking alone down Floyd and then Central.  Never were stopped where I could talk to him, but I did manage to yell "Keep up the bloggin!'"  I didn't have time to say  "heyI'mCardsFan922doyoureadmyblog?", or maybe I did, but really I was afraid of what his answer might be.