Charlie Strong and I are very much alike in a number of ways, the two most prominent being: 1) We're both unspeakably intimidating. 2) We both go for it. He sends the offense onto the field on 4th down in overtime, I post pictures of gnomes and wear the jersey of a former kicker. Four enormous testicles.

I'll come right out with it: I supported the call at the time, and I support the call now.

Two Saturdays ago Strong elected to go for it on 4th and 1 near midfield, with an eight-point lead, against a team that hadn't moved the ball all half, and one play after his starting center had been inured and forced to leave the game. There was no outcry in the wake of the decision, only because the officials spotted the ball four inches differently than they did on Saturday.

While I agree with the decision, the play call does deserve a bit of criticism. After his, "if we can't get half a yard, we don't deserve to win" comment following the Syracuse game, you knew he was going to go for it. My fear, which was quickly realized, was that he would attempt to pick up the first down in the exact same manner. The sneak worked at Syracuse...barely. I'm actually not convinced that the progress achieved on the two plays was not identical. Spotting the ball after a QB sneak is about the furthest thing from an exact science, hence the risk you subject yourself to when you select that play call.

I know Dom Brown hasn't taken a snap under center in a game this year (has he?), but surely he's taken one in practice. Assuming he has, send him out there. The kid is 6-3, 225.

Many people have argued that Bilal Powell ought to have had the ball in his hands on the 4th down play, but I don't think he was an option. Three plays prior he had come up a little gimpy and signaled to the sidelines that he needed to come out of the game. Jeremy Wright got the ball on the next two plays.

Powell was tremendous, but he was just a half-step or so slower than he was a month ago. The only time it was really evident was on the long run where he tried to plant on his injured knee and ended up tripping himself near midfield.

Still, he managed to go for 140 against the best defensive line in the league, proving that an 80% Bilal Powell is still better than the vast majority of ball-carriers in the country.

This was easily the most passionate Bilal has ever been during his time here, a fact you have to chalk up to him likely knowing a number of players on the USF roster. Every time he took a big hit, he would bounce up and glare at the Bulls players celebrating. The kid wanted the game as much as I've ever seen a Cardinal player want anything, and I hate that he didn't get it. 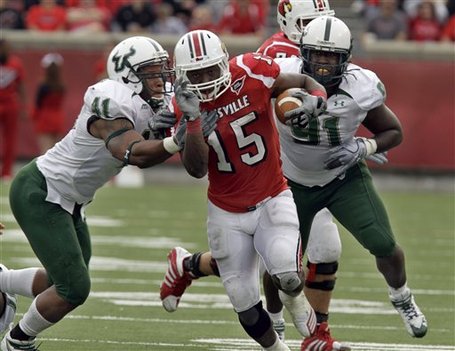 The spot on Wright's third down carry in overtime was complete bullshit. The chop block call on Josh Bellamy, though far less important, was even worse.

I saw Strong setting up for the ice-the-kicker timeout, and when it became apparent that it was going to be too loud for the other officials to hear the whistle and stop the "practice kick," all I could think of was how bad it was going to be if the kid missed it. As excruciating as this loss was, it would have been two or three times as bad if the USF kicker had missed the field goal that didn't count and then buried the game-winner on his second try.

If your complaints about Louisville football fans haven't changed anything over the past five years, they're probably not going to change anything today. All any one of us can do is our part.

This was the first time I've seen the majority of Louisville football players truly crushed after a loss since the '06 Rutgers game. It was hard to watch them come over to the band and attempt to sing the fight song.

I like Mike Sanford and understand that he has a limited set of tools at his disposal, but I thought the way he utilized the Wildcard on Saturday really disrupted the flow of the offense. Every series in the second half (sans the TD drive) seemed to follow the same formula: Louisville would run a couple of solid plays and pick up a quick first down, then Brown would come into the game and run for two yards. Burke would then re-enter and then after a short completion, an incompletion or a short run, Louisville was faced with a third and five or six that it wouldn't pick up.

Stick with what works.

Jersey throw No. 3 took place when I got back to the car after the game. It was the least violent of the three.

The game-tying touchdown happened right in front of me, and I was watching Bellamy the whole time. I don't think a pass has ever hung in the air that long. It seriously felt like a five-minute play. The succeeding celebration was pretty cool though.

If "J-Bone" and U.S. Reed fought to the death, I'm not sure who Louisvillians would root for.

The kick return changed everything. South Florida has 68 total yards of offense in the first half, and their only three points had come by way of an awful punt. If Louisville starts the second half with the ball up 14-3, I can't see them losing.

We've been talking about special teams costing us a game all year, and Saturday it finally happened. It's the area where it's the most difficult for a team to hide its lack of depth and athleticism, two issues that this Cardinal team is saddled with.

Still, the unit shouldn't have been as bad as it was last weekend. Consistently punting the ball sky-high into a fierce wind should have been discouraged, and not squib-kicking near the end of the game was unfathomable.

Vic Anderson got just one carry and tweeted after the game that he was thinking about giving up football to get into coaching (for either football or soccer). He's since gone back on those comments, but it's safe to say that he's been discouraged by this season.

Fact: Jeremy Wright is going to be very good.

Brandon Heath was a monster. From a big-hit standpoint, it was the most impressive individual performance of the season.

If U of L had won, then Shenard Holton would have probably received a lot more praise for chasing down the South Florida running back and saving a touchdown when he could have easily given up on the play.The Bulls ultimately settled for three and the Cards momentarily held onto a 14-13 lead.

This was the first time all season that Louisville lost a game it truly should have won. As hard as that is to stomach, this team's ultimate goal of making the postseason is still very much in tact.

Because of what happened in '07, people are worried that 6-6 isn't going to be enough to send this team bowling. Let's clear this up: if Louisville splits its final two games, there is about a 95% chance that they land in a bowl.

The Big East now has six bowl tie-ins (it had five in 2007), and there are a grand total of 35 bowls. A year ago, only three bowl eligible teams were left out of the postseason: Notre Dame (which chose not to accept any bowl bid), Louisiana-Monroe, and Louisiana-Lafayette. All three were 6-6. If the same scenario had occurred this season (there's an additional bowl game this year), the Irish would have been the only .500 or better team in the country staying home for the holidays.

Louisville still has an opportunity to achieve something most people thought wasn't possible before the season, and they have the chance to do it on Senior Day against their biggest conference rival.

There's still plenty of reason to be excited about the upcoming weekend.