Everybody Back On The Roller Coaster: Basketball Is Here

Share All sharing options for: Everybody Back On The Roller Coaster: Basketball Is Here

And we're back.  As the second greatest Louisville-born sports blogger Hunter S. Thompson liked to say, buy a ticket, take the ride. 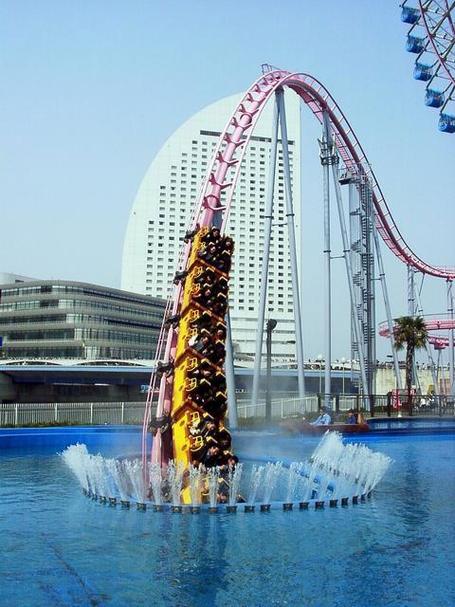 This year promises to be an especially awesome roller-coaster.  As bright as the future looks with the star-studded 2011 class and as literally bright as the present looks -  thanks to the incredibly bright and gorgeous new arena - the metaphorical brightness of the 2010-11 season is still up for debate.  Expectations are low coming into the season as even Pitino is calling this a "bridge year."  But after two games, I have talked myself into this team.

Now, that doesn't mean I am buying Elite Eight tickets.  Or even guaranteeing an NCAA berth.  But after two games, one thing is clear: I can really see myself liking this team.  They play hard, they play unselfish, they make passes and know that they'll get it back, they make layups (especially Chris Smith!), they run, run, run and they seem to really actually like each other.  Any one guy can lead the team in scoring any night, and if they get hot from three, they will beat a lot of teams on the schedule.

There are only two things I feel extraordinarily confident about this year.  First, at multiple points in the season, maybe even after every game, I (and all of our fans) will say the following sentence: _________ is the best player on the team.  And every time it is said, it will be a different name and the person will have a valid argument.

Second, the over/under on "sneaky/smart player on the other team steals the in bounds pass from us because we immediately throw it in without looking" is 10.5.  Watching those two exhibition games, I couldn't understand why no one from the other team would pretend to head back up court but then jump back in the passing lane.  That will happen.

In lieu of a long-winded season preview or an incredibly detailed 12-part PS3 simulated season with recaps of all 31 regular season games, I thought I would give this message to Rick Pitino, who I know is an avid reader of this blog and recently changed his screen name to......VillenHD.....just kidding...as far as you know....

Anyway, that message is this:  STICK WITH IT.  Since first reading about Pitino's planned run-and-gun style this year, I joked that the over/under for Pitino switching back was December 18th.  Even after Thursday night's game, I was saying the same thing...out loud on the drive home to myself.  I'm not sure Pitino will stick with this system, but if he does...

So my biggest fear about the season is not that we don't have enough talent, that we can't play defense, that we don't have the shooters.....my biggest fear is that Pitino gives up on what could be a winning strategy.  And it could be a winning strategy that will also make our team really, really fun to watch.  That fear wasn't helped much by today's press conference:

Look, this is a huge departure for Pitino.  The team I've seen for the last two games looks nothing at all like the teams we are used to watching.  Constant switching man-to-man (aggressive but ultimately porous, especially inside) defense, fast break layups, lots of passing, no real half-court offense, jacking up threes in the first few seconds of the shot clock and not getting pulled.  And the substitution patterns.  My god: the same five guys, playing well together, stayed in without substitutions for like 4-5 minutes straight!  When was the last time we saw that ever? And Pitino's NBA-like substitution patterns were so predictable, my wife was genuinely impressed the first time I called a two-player substitution 5 seconds before it happened.....and then annoyed the next 5 times I did it that game.  Mainly because I was so proud of myself.

As far as I can tell, the "system" this season is this: get off a ton of shots, wear the other team out, rush the other team's offense, giving up points is okay, because we really want to outscore, outrun, outlast you.  Oh, and hope a couple guys get hot from three.  That's pretty much it.  Nothing complicated, just Pitino's theory about the full-court press applied to offense.  It's not as radical compared to his early UK teams.

These last two games, the team has looked so different than they did the last five years.  But it's one thing to do it against NKU and Kentucky Wesleyan.  It's quite another to try it as the feature game at 8 PM of ESPN's 24-hour marathon, against America's Team that almost won the NCAA a few months ago on what would have been literally the best moment in sports history.  And to keep trying it when you get blown out by a UConn or Cincinnati here and there.

If we lose our first 10 games, or even the first 3 or 4, sure, maybe it's time to change the strategy up.  But with expectations low, the afterglow of the brand new arena, an awesome incoming class next year, and the right personnel for the system, why not get outside the comfort zone, stick with an unconventional strategy and see if it works come February and March?  What is there to lose this year?

The 2010-2011 season will make us throw up, will be exhilarating and at many points throughout it I'm sure I will want to make it stop so I can go get some funnel cake.  But I like this team, and I really hope the fans, the players and the Coaches give this year's system some time.  Because at the end of the day, roller coasters sure can be fun.