This team just does not lose. 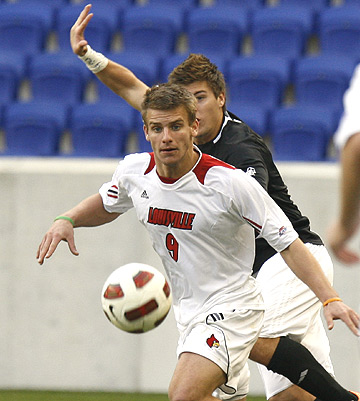 On Sunday afternoon, the Louisville men's soccer team continued their unbeaten 2010 season by defeating Providence (finally) 3-2 on penalty kicks after finishing regulation and two 10-minute overtime periods tied at 1-1. Fitting that the game was decided on penalty kicks as both goals in regulation hinged on fouls.

With less than 6 minutes remaining in regulation, Louisville forward Colin Rolfe (pictured above) fell to the the ground after being deliberately elbowed in the face by Providence defender George Hodge. Rolfe, a junior, had been targeted by the Friars' defense all game, earning multiple fouls for his toil. Such is the case when you're the Big East's lone pre-season First Team All-American.

Just 15 seconds after play resumed, Rolfe collected a pass 35 yards from goal, dribbled straight at Providence team captain Bryan Minogue and broke a scoreless 0-0 tie with his left foot, placing a well-struck ball into the net past a diving Jhojan Obando.

Rolfe was taken out of the game immediately after the goal and Louisville Coach Ken Lolla had to feel pretty confident his side had clinched their 17th win of the season. But with 2 minutes remaining in the game, Providence was awarded a penalty kick after a controversial slide tackle by Louisville defender Chase Rodgers in the Cards' own 18 yard box.

No card--yellow or red--was issued to Rodgers for his foul in the box, which is typically the minimum penalty in that situation. Perhaps the ref wasn't that confident he'd made the best call. Providence converted on the penalty kick and regulation ended in a 1-1 tie.

After two scoreless overtimes that featured several diving saves by both team's goalkeepers, the Big East Tournament Championship would be decided by penalty kicks. Louisville goalkeeper Andre Boudreaux was the difference, stopping two Providence PKs, the second of which secured the win 3-2 for Louisville.

Louisville earns an automatic berth to the NCAA Tournament. The NCAA selection show will be aired on Monday, Nov 15 at 4:30 EST. The tournament bracket will be available immediately following the selection show on www.ncaa.com. Louisville is expected to play their first round match at Card Park this Sunday at 7pm EST. Call 502-852-5151 to order tickets.

So Louisville men's soccer is the Big East regular season and tournament champs, ranked #1 in the country and will likely be the #1 seed in the NCAA Tournament. Does this sound familiar? I just checked and Michigan State has a solid men's soccer program and is a virtual lock to make the NCAA Tournament this year. Fortunately, there's no Suton on their roster but if the Spartans are placed in our region, I'm going to be nervous.