Card Chronicle news and views for 11/11

Share All sharing options for: Card Chronicle news and views for 11/11

It's been nearly a week now and I still can't get over how how awesome last Saturday was. I'm actually writing this from inside the CCC (Card Chronicle Cavalier) at PJCS. I get excited and I take things too far. Love me for it.

Syracuse may not be the '86 Bears, but that's a good football team (with a good football coach and good football players making good football plays), and they were playing to be bowl eligible for the first time in six years, which essentially made the contest a mini-bowl game in and of itself. The environment inside the Carrier Dome was as inspired as it's been in quite some time, and Louisville still went there and won without its starting quarterback and the Big East's leading rusher.

It had been three years U of L won a Big East road game and a little over two since it had pulled out a meaningful W when the game was in doubt in the fourth quarter. This team achieved both of those feats in one afternoon.

I said it during the game and I'll say it now: that was the most violent Big East football game that Louisville has participated in since it joined the league. The effort level from both teams was off the charts.

Doug Marrone may well end up being the Big East coach of the year, but he was outdone by Mr. Charlie Strong and his staff on Nov. 6.

Louisville's front four knew the snap count on every play and Syracuse never adjusted. Conversely, the Orange killed Louisville with the naked boot in the first half, but in the final 30 minutes there was only one occasion (freshman B.J. Butler was the victim) where the play fooled one of U of L's ends.

The Cardinal coaching staff made all the right calls and the players responded.

I said during the end of the Steve Kragthorpe era that this fan base was not going to celebrate a third-tier bowl with the same vigor it did in '99, but the thought of attending a Louisville bowl game party for literally any bowl during the holidays has me pretty giddy.

The basketball team is going to get pushed by Wesleyan tonight. Nobody freak out.

The father of a friend of mine sat next to Devante Parker's dad during a recent Ballard game, and Mr. Parker told him that Devante's recruitment was "still open" and that Kentucky was in the mix.

A lot of times dads love the attention of recruitment even more than their sons, and you have to hope that this is merely a case of that. Since there have been no other indications of Parker wavering at all, it'll be a huge surprise if he doesn't end up a Cardinal.

Also, he should be Mr. Football.

I'm not sure if it's common knowledge or not, but Tony Woods is living in Owensboro and working at the Daniel Pitino Shelter.

Like it or not, he's going to be a Cardinal.

Very happy that DaMarcus Smith's season ended with him in one piece.

Word is that the four-star QB is still trying to enroll at U of L in January. He remains firm in his commitment to Coach Strong, but will be taking official visits to Illinois and Oregon.

If I'm an 18-year-old high school football star, I am taking every possible visit to every possible campus I can. Still, it'd be hard not to be swayed at least a little by what Oregon has to offer at the moment.

I went to the Trinity/St. X game last month and left with two major thoughts:

1. I don't know what's happened in the past seven years, but X's student section has become a disgrace. Only about three rows deep and no enthusiasm.

2. Trinity sophomore James Quick has the Montrell Jones/Michael Bush/Brian Brohm look of "why is this college kid playing against these high schoolers?"

If he keeps working, grows a little bit, and improves his explosiveness, he's going to be one of the better players to come out of the area in some time. I hear he can also hoop a little bit.

I can't figure out if that means it's time to change the site's tagline or just hang it up altogether and chalk this whole experience up as a win.

The definitive Card Chronicle picture of our time: 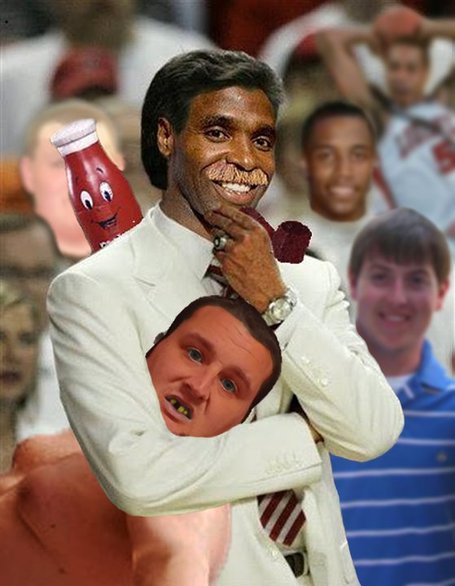 UofL Redbirds...I have no words.

I've heard that Dominique Brown has been lining up all over the field this week during practice. No idea if that means his contribution will be any more or less than usual on Saturday, but I'm interested.

It's going to rain during the game this weekend, but probably not before. I'll take it.

It's officially finals month, and the reality of how little free time I'm going to have is starting set in. Brace yourselves.

Subpar rap references 3/4 of you won't get, for the win.