For those who remember Through The Fire, last night's awesome 30 For 30 documentary on football legend Marcus Dupree may have looked familiar.  That's because both were done by award winner Jonathan Hock.  In listening to his podcast with the godfather of sports bloggers Bill Simmons, he mentioned that he is putting the finishing touches on another documentary about Shoni Schimmel, a Native American point guard who he raved about as being like a teenage girl Pistol Pete. 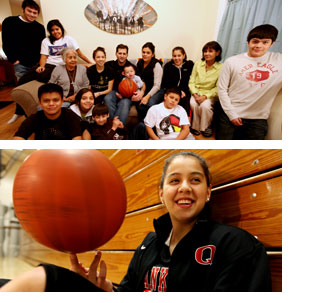 When it comes to superstar point guards with difficult backgrounds and uplifting stories who have documentaries made about them by Jonathan Hock, the second time is apparently the charm for the Cards.   Shoni is the top-rated recruit in the Louisville Women's Basketball 2010 class, profiled today in the CJ:

The 5-foot-10 Schimmel is the centerpiece of the class and is expected to start at point guard. She averaged 29.8 points, nine rebounds, 7.3 assists and 5.5 steals as a senior at Franklin High School in Mission, Ore.

"It's been fun," Schimmel said of her transition. "The chemistry is great, and we all get along as a team. I would say (the hype) is motivation for us to go out there and be the best we can be. But we can't worry about what people say; we just have to go out there and play."