Share All sharing options for: Pitino: Gorgui Dieng is ineligible

Rick Pitino announced during the Louisville basketball tip-off luncheon this afternoon that freshman center Gorgui Dieng has been ruled ineligible to play this season by the NCAA. He added that U of L is appealing the decision.

The particulars of Dieng's situation have not yet been made public, but I'm gonna go ahead and jump the gun again and say that the NCAA is flat-out in the wrong here. For the duration of his academic career, Dieng has been the type of student every parent wants their son to be, and for him to be ruled ineligible - with the current climate of major college basketball being the way it is - is unfathomable. 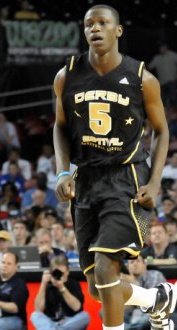 More in a bit on Dieng, the NCAA and the luncheon (teaser: Swop is out six weeks with a hernia-type injury).