Believe it or not, we are approaching the first basketball weekend of the new season. It's amazing how that sneaks up on you when the football team is this fun to follow. Anyway, to get us in the mood I thought it would be fun to relive what is probably my favorite post from the most exciting basketball month in this site's history: March of 2009.

With the collective eyes of the sports world focused so squarely on a single event, there isn’t a member of the media who isn’t tirelessly probing for an unexplored angle, fact or statistic to feed the attentive public.

It doesn’t take a crack research team to tell the world Terrence Williams is a stat stuffer, or Earl Clark is soon going to be making a lot of money in the NBA. The most dedicated of the bunch will point to the defense of Andre McGee and Preston Knowles or the emergence of Terrence Jennings in the second half of the season as keys to Louisville’s climb to the top of the polls.

Still, there’s a driving force behind the Cardinals’ Big East regular season and tournament dominance that you’re unlikely to hear mentioned anywhere outside of these link-infested walls.

His name is Almost Dunking Marques Maybin, and he’s a hero. 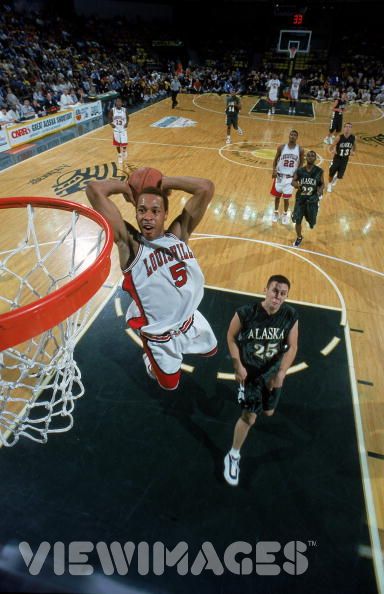 Almost Dunking Marques Maybin, or ADMM as he’s known to those who idolize him, has been the game thread image on CardChronicle.com for an amazing 24 of Louisville’s 28 victories. His lone defeat came at the hands of then top-ranked Connecticut on Feb. 2.

Since his debut against Indiana State on Dec. 6, Almost Dunking Marques Maybin has been benched four times. Incredibly, Louisville has lost all but one of those games. The only Big East tilt he didn't get the start for was a stunning 33-point blowout loss to Notre Dame in South Bend.

"I’ve never had anywhere near as much confidence in a thread image as I do in ADMM," said Card Chronicle founder Mike Rutherford. "Some talismans ask to be used in game threads, but he’s the first one I’ve ever been around who demands it. You see this black eye? That’s from just before the Notre Dame game. And you see this massive head wound? That’s from just after it. Simply put, the man’s a competitor."

But he's a competitor whose lofty status as the pictogram for the top overall seed in the NCAA Tournament could never have been predicted.

ADMM wasn't recruited for longevity. His sole purpose on Card Chronicle was to help bring about three wins in three days during the eponymously titled Marques Maybin Classic. But the Cards, who had been coming off of a shocking 14-point loss to Western Kentucky, were so dominant in their three wins that Rutherford was hesitant to change anything.

"I never thought I’d have to use him again after the Classic," Rutherford said. "But Phil Jackson never thought he’d ever have to start Michael Jordan. Know what I’m sayin’? You don’t? What sports blog do you run?"

ADMM was finally sent back to the bench on Dec. 18 and watched from the sidelines as the Cards struggled to a shaky nine-point victory over Ole Miss. He was also watching two days later when they fell to Minnesota by six in Arizona. A 20-point ADMM-aided victory over UAB a week later wasn't enough to get the talisman the job as full-time starter, but a one-point New Year's Eve loss to UNLV without him was.

The image's complete resume is quite staggering:

--Louisville's Record Without ADMM: Since His Debut: 1-3

--The Cardinals are 11-0 in ADMM games away from Freedom Hall.

--Louisville owns a 19-1 Big East record with ADMM. The only league game the talisman sat out was the shocking 33-point loss at Notre Dame.

--With ADMM, Louisville won all three of its Big East Tournament games in Madison Square Garden by double digits.

But all these extraordinary statistics beg the question: What in the world happened against Connecticut?

Rutherford has an idea.

"On Jan. 14, when ADMM madness was really picking up, I promised to wear nothing but a Marques Maybin jersey to Derby if the team won out with him leading the way. Obviously, it was something I didn't really want to do, and Almost Dunking knew that. As much as he didn't want to, he felt like he had to take a dive for me, and facing the No. 1 team in the country provided the perfect opportunity for that.

"He's the best friend I've ever had. Don't write that I'm crying."

The last three months have been a magical journey for everyone associated with the Louisville basketball program, but there's a chance that the best is yet to come.

Even the good luck charm himself admits that he feels his work is far from over.

"I want a national title and I really want to know what it feels like to finish that dunk," ADMM said through a translator. "And then I want to bump that Alaskan bitch on the way down to the other end of the floor."

If the past is any indication, "that Alaskan bitch" had better go shopping for some shoulder pads.