Cards can exorcise a wealth of demons by beating Connecticut

Share All sharing options for: Cards can exorcise a wealth of demons by beating Connecticut

The Steve Kragthorpe era at Louisville will be remembered primarily in the form of three emotions: pain, frustration and anger. Each of these emotions has a set (or pair) of losses that best exemplifies it.

The three losses to Kentucky, I think, were the most painful part of the Krag era. The pair of losses to Syracuse - one of which being the (temporary) biggest upset in the history of college football - were undoubtedly the most anger-inducing. That leaves frustration, and no three defeats in the past three seasons have been more frustrating than the trio of losses dealt by the Connecticut Huskies.

The first, and most infamous, is the "unfair catch" game in '07.

The Cards had dominated the rainy Friday night before Larry Taylor's antics, and likely would have been up 17-0 after Earl Heyman's fumble return had the proper call been made. Perhaps most notably, the play resulted in the first, and also the most infamous, Art Carmody jersey throw. There have been two since.

If the play and the loss weren't already hard enough to swallow, you had this quote from Taylor after the game:

In terms of pure frustration, I'm not sure there's a U of L loss that tops it for me. For proof, here's my take following the game:

Last night marked one of the lowest points in my relatively short but celebrated life as a U of L fan.

I'm no longer sad, I'm not disappointed, and I'm not overly pessimistic about the rest of the season anymore; I am completely and utterly furious.

I'm mad at Charlie Stubbs, who continues to show that he is the worst play caller this side of my deceased great great grandmother. I'm mad at the Big East officiating crew that botched a call worse than I've ever seen during a Louisville football game, and completely shifted the momentum of the contest. And I'm mad at Steve Kragthorpe, a man who - there's no reason to beat around the bush anymore - I have absolutely zero confidence in as a head coach.

This can't be saved anymore. The most anticipated season in the history of Louisville football is officially a complete abomination.

I don't really have anything else to say at the moment besides GIVE BILAL POWELL THE FUCKING BALL.

For the record, people made fun of me for that Powell comment, including a prominent mainstream media member who made a joke and posted Bilal's stats (I think he had two carries at that point) on his blog. Now....Boner Jams.

People often forget that Louisville started the 2008 season 4-1 and would have been 6-1 had it not been for an almost inexplicable home loss at the hands of Memphis...I'm just kidding, it was Connecticut.

The '08 loss nearly lived up to the standard set the year before. It's like the second season of Jersey Shore of Louisville football losses that made you want to kill yourself.

The Cards outgained UConn 508-279, but penalties and turnovers at the worst possible times kept the Huskies in the game. Up 21-19 with 2:45 to play, Hunter Cantwell was picked off by Lawrence Wilson, who took returned it 45-yards for what would prove to be the game-winning score. A couple of friends and I moved down to some empty seats close to the field just so we could have better view of Cantwell's last second Hail Mary being picked off, and so we could be "shushed" by some no-name Connecticut offensive lineman. It was not a good moment.

During the drive home we listened to Kragthorpe hurl cliche after cliche in a postgame speech that most of us could have already recited without effort at that point. A buzzed friend in the backseat said "OK, I can't take it! Turn it off!" at least three times during ride. He also briefly threw out the idea of a house-egging. It was turned down.

When I got home I promptly sent a two-word text message to Ms. CC, whom I'd just started dating. The first word was "mother." She was unaware at the time that, whether she cared or not, 95% of the texts I would send her would have to deal with Louisville athletics and that I would just assume that she understood the topic at hand. Her speedy response reeked of concern with a touch of fright. 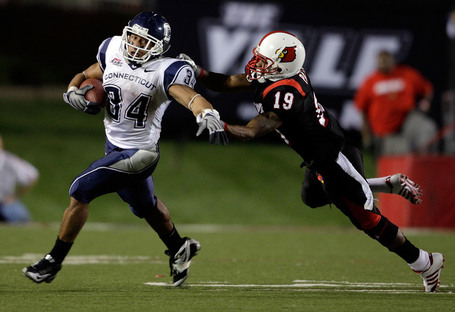 The only reason that last year's UConn loss didn't sting quite as bad was the fact that apathy had already largely set in. The elements of frustration were all there; the Cards were in the game early and moved the ball well, but were killed by penalties and four turnovers, but there just wasn't much to lose at that point.

You might want to mute your speakers for this video:

The consensus is that Charlie Strong has the program moving in the right direction, but he's still dealing with a roster full of players who don't know how to win. The team has already squandered opportunities to post statement wins over a pair of rivals, but now this weekend presents another big chance to prove that things are changing. Upending the program the Cards most snatched defeat from the jaws of victory against under the previous regime would signify the best moment of the Strong era to date. That's a bad sentence but I'm too tired to fix it.

A victory on Saturday would be huge for this team's postseason outlook, huge for the psyches of these players, and huge for the direction of the program.