Veterans go down in basketball scrimmage

Share All sharing options for: Veterans go down in basketball scrimmage

We're hitting late October which means dry leaves, Hocus Pocus and blowing every bit of Louisville basketball news completely out of proportion. In keeping with tradition...

Eric Crawford reported via Twitter earlier today that the Louisville basketball team held a scrimmage today inside the KFC Yum Center, and the final score was a bit surprising. A team led by Peyton Siva, Preston Knowles and Terrence Jennings was knocked off, 125-112. 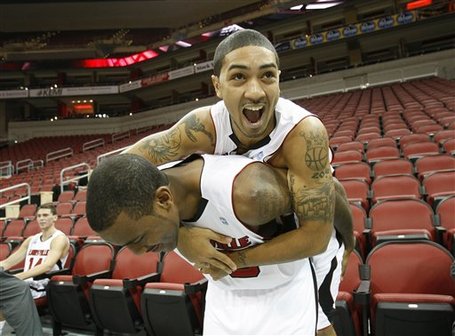 Kyle Kuric scored 40 points and George Goode added 39 (to go with 14 fouls) to lead the victors. Also of note was the fact that freshman Elisha Justice dished out ten assists and somehow managed not to turn the ball over once.

Let's talk about this until next Wednesday.