Well, technically I have Insight cable and therefore would be able to watch the game on espn3.com Saturday night, the first ever "internet only" broadcast UofL football game.  But, since a CardChron lurker (you know who you are) has scheduled his couple's baby shower for 7 PM tomorrow night, I will likely not have access to the game.  And, as I have not read much on Arkansas State and didn't watch last year's game, I don't have much insight into this week's opponent.   But that's okay: this season is all about the Cards doing their thing, and if Krag could beat Arkansas State, in front of dozens of people on Halloween, Charlie Strong can go on the road and beat them.

The CJ has done a good job this week with more in-depth stories about the Cards (all headlines simulated):

Just Because Everyone Says It, Doesn't Mean It's True (Except Maybe It Is? #Imjustsaying)

Bellamy Seems Pretty Awesome, Now Must Put Money Where His Body Has Written Checks That Need to Talk

You Already Liked Greg Scruggs, But You'd Like Him Even More If You Knew These Things

And The Best Story Of The Week, Card Chron Disputed Favorite Player Hakeem Smith Already Spoken For By Secondary-Mate Holton

Okay, fine, let me go read about Arkansas State.....a 1-3 record, but somewhat deceiving, since one was @Auburn (pretty good team), and the other two were 1-score losses on the road at decent Louisiana-Lafayette and Troy.  Their lone win was a 34-20 defeat of Louisiana-Monroe.  They throw the ball a lot and are ranked 10th in the nation with about 310 passing yards per game.  But their defense is not exactly Oregon State-esque, as 105 teams allow less points, on average, per game, than do the Red Wolves.  Also, their mascot is the Red Wolves. 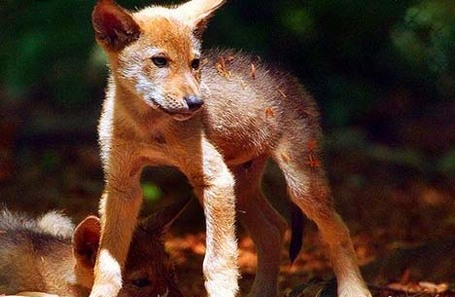 Not so tough.  via www.treehugger.com

Hopefully, we don't play down to the opponent's level, and other than testing our young secondary with pass after pass, I'm not super worried about them scoring a ton of points.  Arkansas State has a mobile QB, but I'm more scared of his arm than his feet, if only because our front 7 seems to be a better unit and to tackle runners better than our secondary covers receivers at this point.  A loss here would suck and would probably make a bowl extremely unlikely.  A win would be great, and a beatdown would be really exciting.

Or so I will have to guess, because while watching a livestream on a laptop would be fun, I have two tickets to the gun show a baby shower I'm looking forward to attending.  Seriously, it will probably be fun, the lurker-dad lives out of town and it is their first kid.  Priorities, people.

First Cardinal Play From Scrimmage:  For the love of god, please be a misdirection play on the first play of the first offensive series.  Will probably just be a basic run up the middle.

Cardinal Offensive MVP:  Bilal Powell, in case you are reading this, Arkansas State cannot stop you.  Also, it's late and you should be in bed.

Cardinal Defensive MVP:  Brandon Heath.  Making Arkansas State's QB 1-dimensional will help and will probably be his primary job.  His senior season has not gone as well as we hoped (takes more than 3 games to get the Kragness off you) but this can be the first game of the rest of his career.

First Cardinal touchdown:  Powell, short run.  The CJ says (linked above) that both defenses give up the big play, but our offense doesn't really do big plays for touchdowns.   Until they do one, I shan't predict it because my credibility is too important.

Specific Vision:  Game thread is horribly disjointed because of people's various bandwidth issues.  Lots of complaining.  Couples shower devolves into something similar to scene described in Kesha's smash hit "Take It Off" (NSFW)

Coach strong asks who's the most famous singers to come out of Memphis, with a straight face one of my teammates said 3 6 mafia.. Wow..

Everybody knows the right answer is that guy who sang "Walking In Memphis."  Anyway, true story: in 2006, on a bachelor party trip to Memphis, I saw 3-6 Mafia realllllly early in the morning out on Beale Street.  Nerd alert: it was like 7 AM, we had gotten up early to have breakfast and drive home, and they were doing a photo shoot in a closed store while Beale Street was otherwise deserted.  And I had no idea who they were.

ESPN3.com Good Or Bad?  Seriously, this is ridiculous that they will not show our game on TV in our home town.  Everyone who tries the HDMI hook up let me know how it goes.  But even with high speed broadband and a reasonably fast processing laptop, I've still never watched a complete game on ESPN3 (or mlbtv or netflix or any other streaming live video site) without buffering, hiccups, pauses, un-sync between audio and video or generally "not the same as TV" experience.  "Convergence" of internet and TV has been a thing for awhile now, but the point is, TV through a cable just works, and internet-TV doesn't work as good.  Come on, man!

Final Score:  Surprisingly close, but the Cards win it 28-17.  Powell runs for 2 TDs, Froman for 1, and Froman throws a short TD pass to CamGraham.