Thoughts from Cincinnati series and the Keg of Nails:

First off I would like to thank Mike, Ms. CC, and the rest of the CC tailgate crew for their generous hospitality last week. We shared a few laughs, had a few beers, and enjoyed the 56-0 dominating victory by the Cards. Also, Ms. CC makes some pretty good football shaped cookies, and yes, I did eat the cookies laces out. I hope to be back soon.

I have a lot of memories from the Keg of Nails games from 2003-2007. There is nothing like a good rivalry game in college football. It is one of the reasons that makes the sport so great. I love the Governor's Cup just as much as the Keg, but the thing that makes the Keg a little different is that there are not only bragging rights on the line, but conference supremacy as well.

When I was sitting in he airport last weekend, I started thinking about all my memories from the Cincinnati series. There was Stefan Lefors running 69 yards for a big TD and then hitting J.R. Russell in 2003 to win the game. Michael Bush faking the reverse and going 81 yards to the house in that same game. There was Gavin Smart knocking down the last gasp pass in 2006 that, looking back on it, could have derailed our title dreams before they even started. Brian Brohm marching down the field for the go ahead score in 2007 to pull off the upset and keep the Keg back in Louisville for another year. Heck, even the time we watched The Family Guy DVD's on the offense bus on the way back in 2005. I could go on and on.

Above all others, though, the 2004 game is my favorite memory, not only because of the Keg of Nails, but also because of what that game represented.

It was senior day for a lot of great Cardinal players and some great teammates. Guys like Stefan Lefors, Kerry Rhodes, Lionel Gates, Robert McCune, J.R. Russell, Tiger Jones, Will Rabatin, Adam McCauley, Antoine Harris, Bobby Leffew, J.T. Haskins, Brent Johnson, etc. This would be their last time playing in PJCS. At the same time it was also a chance to win a Conference USA Championship. A lot of guys on the team had won this title before, and most of the guys that hadn't had won a state championship before they got to college. I had never won a championship in football before (unless you count the time in 6th grade when the St. Joseph's Falcons beat the Evangel Eagles, led by USC quarterback John David Booty and LSU running back Jacob Hester, to win the Shreveport city championship...which was awesome), so this was my first chance to do so.

The 2004 Cincinnati game fell on Thanksgiving weekend, so with classes being out and such, we had some extra time to prepare. Sometimes it is not that good to have extra time because you end up with 100 guys in the locker room looking for stuff to do. This was one of those weeks.

On Wednesday morning it started with "the neighborhood" tossing little pieces of rolled up tape over the lockers trying to hit someone in "the corner." You would never know who threw what because everyone would deny it. It was like a game of Battleship. As the day went on, it went from pieces of tape, to cups, to towels, to Gatorade bottles, to whatever. It was all in good fun and we cleaned up everything so the whole team wouldn't get in trouble. Since it was during the holidays, by NCAA rules the team has to provide every player with a meal for each day there is no class. Naturally, we had Papa John's pizza. Well now the neighborhood now had the ammunition they needed. I had just finished taking a shower and was getting ready to get dressed when all of the sudden out of nowhere three pieces of pizza stuck together crushed me in the face. It was a direct hit. I had cheese and pizza sauce all in my hair and face. I now had to go take another shower. I had no proof of who threw it but I am pretty sure it was Antoine Sharp. Antoine, with a slight smile on his face, still denies it to this day.

Throughout the entire week in walk-thrus, practice, etc., Paul Petrino kept telling everyone that the first play from scrimmage would be a touchdown if everyone did their jobs. Every day he would say the same thing, "this play is going to be a fu%#ing touchdown!!!!! Eric, believe that this is going to be a touchdown!!!" I didn't really believe him, but sure enough, right after the kickoff Eric Shelton took a handoff and went 80 yards untouched into the end zone. That was just the beginning. I learned never to doubt Paul again. Cincinnati couldn't stop anything we threw at them.

Looking back on that game it was really fun to play in. The defense dominated and set up the offense in great field position all day. The offense clicked with Brian and Stefan throwing, Eric Shelton and Kolby Smith running, and J.R. and Montrell receiving. Montrell returned a punt for a TD and we blocked two others for TD's. We scored 70 points, captured the C-USA championship and Liberty Bowl berth, and most importantly, kept the Keg of Nails in Louisville, all in the same afternoon. It was a great way to send the seniors out. Celebrating the win was also a lot of fun. As a team we went into the weight room, accepted the invitation from the Liberty Bowl officials, and broke it down together. 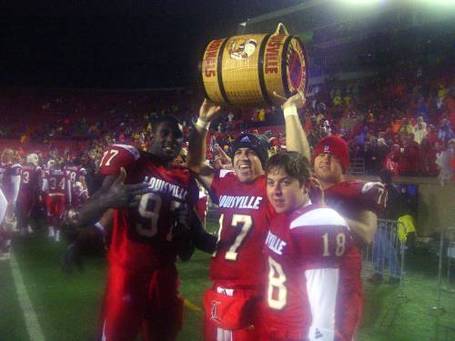 This game is also where the "Bundled Art Carmody" picture originated. Football is supposed to be a tough sport, where men are men, played in the elements. That is great, but on this day I wanted no part of that. I kept that jacket (which had no sleeves) bundled around me for as long as I could. In the second half it got to the point where I would put the jacket on, stay warm, run out to kick another extra point, and immediately go back and put on the jacket. I really liked that jacket.

Each week of the Cincinnati game, the Keg of Nails would sit in the middle of our locker room roped off on top of the Cardinal logo. It was a reminder of what needed to be done that weekend to keep it there. Last year was the first year since 2003 that it wasn't in that circle during game week. But as we saw last Saturday, this team is playing on a different level. The Keg belongs back in that circle.

Go get it Cards.