Share All sharing options for: Keg o' Predictions: Yup, It's Early This Week

Life and work have intervened, and I will likely be with hothot on Friday night watching the game.  Thus, a very early prediction post for this week's battle, the biggest game of the Charlie Strong era.  I feel comfortable taking this position because the UK game was a big deal, but we weren't really supposed to win that game.  Before the season started, there really wasn't a "huge" game on the schedule because expectations were so low.

But don't look now, kids.  We've got a pretty good team.  And that sound you hear is the collective expectations of Cardinal nation ticking up to almost unreasonable decibels considering where we all thought this team was a month ago.  There is serious talk of a Big East Championship.  Like, seriously.  We have West Virginia at home, people!!  Think about it!

So, ya, it's kind of a big deal.  It's time to take the Prediction thing up a notch.  Who are the Bearcats?  Can we really win this game?  Only one way to find out.

Note: the best college football blogger in the known universe, Doc Saturday, posted this a few years ago and I always get a kick out of it: 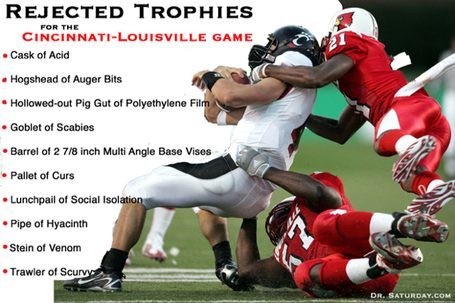 First Cardinal Play From Scrimmage:  I was partially right last week.  The first play was a pass, but it was not a bomb to Bellamy.  Cincinnati's strength by far is it's rushing defense.  They are currently ranked 8th in the country in rush defense and 95th in passing defense.  I think Strong and Sanford go after their strength first and show them Bilal Powell early to see if we can make a dent in the run defense.  So as much as I would love the first play to be a bomb, I think we run the bread and butter, Powell out of the Pistol.

Second Cardinal Play From Scrimmage:  Show us the arm, son.  Froman with a quick read pass to Bellamy, who has turned into quite a player.  He will match up against two sophomores: Reuben Johnson and Cameron Cheatham.  The run defense is so much better than the pass defense because of inexperience.  Backing up Cheatham is true freshman Deven Drane and on the other side is another Reuben, Reuben Haley, equally inexperienced.  Lots of sophomores man the safety spots.  The wide receiver position, which was the cause of much concern after the UK and EKU games, has turned into a bit of strength thanks to Bellamy, the reliable and awesome (and emotionally tortured, if you follow his twitter feed and can make sense of it) Cameron Graham mainly, and even Chichester sometimes.  Dominique Brown even got in on the action, making two awesome catches against Memphis.  Those four should be enough, along with maybe just one screen pass to Powell or Wright (assuming Vic is really hurt), to do some damage to the Bearcats in the air.

Cardinal Offensive MVP:  I can't believe I'm saying this: Adam Froman.  Powell is one of the best running backs in America, statistically speaking, but this will be by far the best rushing defense he has faced all year.  If we win this game, it is because Froman finds open guys, doesn't turn the ball over, makes a couple plays with his feet, and gives the WRs and TEs a chance to get in the end zone.  Cinci's defense is last in the Big East in sacks, and with Froman's relative mobility, he should for the most part have time to throw the ball.  I know that all Adam Froman cares about is earning my approval, and to do so, all he has to do is win this game for us with his arm, feet, head and (can't believe I'm writing....) heart.

Cardinal Defensive MVP:  I was planning on talking about how good the Cincinnati pass offense is, but according to the NCAA (and who wouldn't believe everything they say), the rushing game actually ranked 39th nationally, while the offense is ranked 44th.  Their stars are Zach Collaros, who is accurate and can run the ball as well, and Isiah Pead, who can run the ball good.  He had 21 carries for 169 yards against Oklahoma, which you may recognize as a pretty good team.  This game is going to be a shootout, and getting to Collaros is going to be key.  I'll go with Brandon Heath as defensive MVP, because I imagine he'll get the "spy" assignment on Collaros. The secondary better come to play, though.  I'm just guessing stopping their pass game happens with the front seven, since our secondary is much better at tackling than guarding guys.

First Cardinal Touchdown:  Bellamy on a short pass and run.  Seriously, we are not going to run the ball well on these guys.  Powell will not break a 74 or 80 yard run against them.  We have to score through the air.

Specific Vision:  The crowd, after some attacks by the staff, players and media for not showing up on Saturday, really brings it and PJCS is rocking for the first quarter at least.  As to the "empty seats" thing, I seem to remember a big deal being made about the Norton Beer Garden and the gorgeous PNC club.  Those looked pretty packed from my seats.  But what do I know.

Trick play?  Can't believe they used that WildCard double reverse pass to Chichester against Memphis.  Would have loved to see that for the first time Friday night.  What does Sanford have up his sleeve for this Friday?  Flea flicker out of the pistol?   My real guess is that Dominique Brown gets to throw the ball, but not like as a regular QB, but rather on a play where Froman lines up under center and Brown lines up as a WR or in the slot.  It will not work.  I see things.  Dreadful things.

Bearcat You Learn To Hate:  The Big East's leading receiver DJ Woods.  Averaging 5.8 receptions for about 100 yards per game, he is a favorite target and will get thrown to early and often.  You will get sick of hearing his name.

Final Score:  Louisville 28 - 38 Cincinnati.  I would love to believe, but our defense's weakest link is pass defense, both in terms of getting pressure on the QB and in terms of guarding guys.  Ashley had a couple nice licks on the QB last weekend but his guy was open and Memphis's QB missed him a couple times that would have gone for good gains.  Louisville has the lead in the second quarter, but Cinci's run defense turns us into a one-dimensional offense, and their pass defense is much better than Memphis and Arkansas State's, and Froman just can't get it done.

Adam, I know you are reading this.  Prove me wrong, man.  We still believe what we hear.