Memphis sucks. At sports, at life and at free-throws.

Even with this being an indisputable fact, Louisville beating a bad football team by 56 points at home is a very big deal. Why? Because it wouldn't have happened 12 or 24 months ago.

You can make a legitimate argument that Indiana State was the worst team in college football last season...in any division. Louisville opened the 2009 season against the Sycamores, trailed after a quarter and won by 20. Only Illinois State beat ISU by less (38-21).

This is progress. It's fun, it's exciting and it's promising.

Credit to the staff and the players for brandishing such a high-quality product last weekend.

Let's get this out of the way first: Art Carmody was a member of the CC tailgate on Saturday. 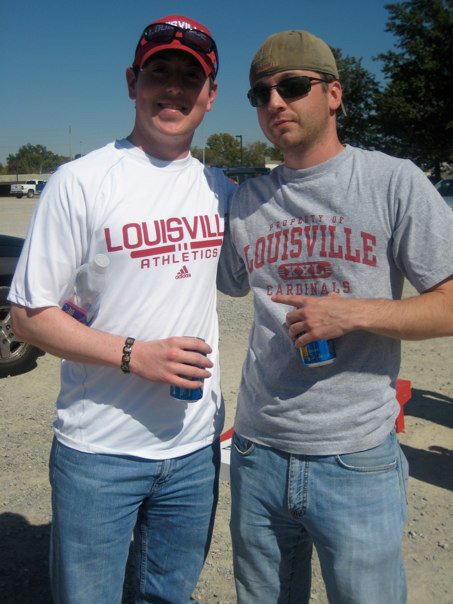 I realize now that my entire picture-posing career had been mere preparation for the moment captured above.

My free, POS phone crapped out a couple of weeks ago and the only other one I've had access to that will read my SIM card is my little sister's old pink razr from '05 or '06.

So that's the lead-in to the story of how Mike Rutherford and Art Carmody met up on Saturday...

Art: "Where exactly in the old Cardinal lot are you?"

Art: "Uh, can you be any more descriptive? What's the number of the section or whatever where you are?"

Mike: "I don't think there are numbers in this lot. We're just...we're in the middle. We've got a grill, and there's cornhole and we've got a red car."

It was exactly how I drew it up in my mind when I was a humble, bored, gorgeous 21-year-old with a blogspot page.

I think my favorite part of the day was when a fellow tailgater - who didn't recognize me despite my "Can I Show You My Blog?" t-shirt - walked up to Art and jokingly(?) said, "hey, aren't you that famous blogger?"

If "Carmody's Corner" dies, so will the city. No pressure.

Overall, a tremendously solid day of tailgating and a big (public) thanks to Art for being Art, and also for acting like Ms. CC's homemade football cookies didn't taste like butt...totally kidding, they were delicious...they were OK.

The bulk of Adam Froman's 12 completions were not especially difficult, but he did make a handful of throws that a month ago I didn't think he was capable of making.

Froman is playing at a level right now that exceeds what I thought was his potential ceiling. He's making plays with his feet, he's getting into his second and third reads, and he's hitting both open and semi-open receivers. He has the ability to be the quarterback for a team that is competitive in the Big East, and I apologize to him (he's not reading) for thinking otherwise.

Bilal Powell is this good. He's not the product of a weak early schedule and he's about to prove it.

I want to tailgate with this man.

Vance Bedford really mixed things up, going with a 3-3-5 alignment for a solid chunk of the game and bringing a lot of heat off the edges. The final score speaks pretty loudly, but the front four (or three) has to start getting more of a push on its own, because guys like Zach Collaros aren't going to miss the open receivers that Ryan Williams did with that kind of time to throw.

Rodney Gnat, Malcolm Tatum and Will Savoy are all putting together solid seasons, but they have to be great from here on out. The ability of this defense to be successful in league play hinges on this group moreso than any other.

So I had tailgated with Art, watched Bilal rushed for over 200 yards for the first time in his Cardinal career, was in the process of witnessing the biggest Memphis beatdown of my lifetime, and then Titus Teague comes into the game and promptly breaks up a pass and delivers a big blow on a run down the sideline.

I'm not sure when, where or how I blacked out and saved 1,000 people's lives last week, but if anyone has video or a link to the news story, feel free to post it.

Josh Bellamy officially has the game to back up the swag.

There is no cornerback in the nation that the man fears. He is, however, terrified of small dogs and ice baths. 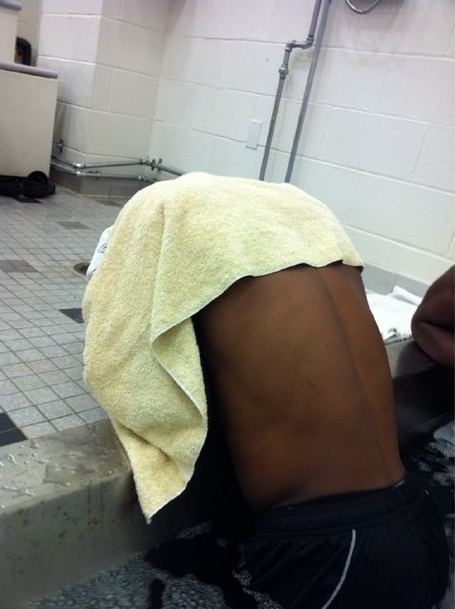 The coaches and players would like you to be in your seats before the opening kickoff. You pay for your seat and it's your choice what you do with that privilege, but the last thing we need at 8 p.m on Friday is for our guys to be doubting their support. Just sayin'.

Josh Chichester is a football player. It has happened.

It will be interesting to see how the offensive staff utilizes Jeremy Wright from here on out. The star of spring practice finally made his on-field debut, and carried seven times for 58 yards and a score.

There's no chance that he cuts into Bilal or Vic's touches, but I think utilizing him in special packages and on kick returns (especially if Vic's having shoulder problems again) could be a solid play. The kid is the program's future feature back, and letting him get a decent taste of Big East football - if the situation is right - would be nice.

Our offensive line is good. Needs to be said.

There might not be a player on the team who deserved a big day more than Darius Ashley. Moving from a glamor position like running back in the middle of your college career can't be easy, and yet Ashley has handled the move in as mature a fashion as anyone could have hoped for. He earned his time in the sun on Saturday.

Solid punting day from John Bleser, who has already improved dramatically since his less-than-stellar performance in the season-opener.

It appears that the staff still isn't quite sure how to utilize Dominique Brown. He took several snaps at quarterback again, but spent most of that time handing the ball off (he carried just once). He also caught three passes, including a very impressive snag along the right sideline in the fourth quarter.

I have no idea what the staff has in store for him, but it's obvious that Brown is a weapon and that it benefits the team to have him on the field.

One of the guys sitting behind me thinks every player on our team is Nate Nord. I laugh every single time. No one else does, but it's OK.

Loved the read-option flea-flicker, but was a bit surprised to see it busted out before Big East play.

Randomly selected YouTube video that will be posted for absolutely no reason:

Zed Evans made his running back debut and promptly received a verbal thrashing from Charlie Strong after running seven yards in the wrong direction on his second carry. Still, Evans displayed some good instincts and solid quickness, and I think the potential is there for him to be an asset at the position somewhere down the road.

Seeing Cameron Graham down and momentarily looking seriously injured made me realize just how much we need him. No. 83 is having a hell of a season.

Deon Rogers has a Terrence Butler-like ability to get the crowd going before kickoffs. I love him for it.

Troy Pascley is now playing safety. Here's hoping he takes to it well and can make a big play to help this team before his college career is over.

I swear I'm going to start getting these posted in a more timely fashion. It's my Phase Three Resolution.

So now Louisville has a chance to knock off the two-time defending Big East champions, start 1-0 in league play and reclaim the Keg of Nails all on the same night.

Friday is the most exciting night this program will have seen in a few years. Credit the new regime.