Time to help out one of our own

Share All sharing options for: Time to help out one of our own

Scott Beard, better known around these parts as Red Reign, is a finalist in ESPN's "The Ultimate College Football Fan" contest.

After ESPN judge, I was selected as one of the four finalists to appear on ESPN.com at which point the voting would be turned over to the viewers.

On Monday, September 27 at 12:00Pm, the voting will begin for each finalist. Each registered ESPN member may vote once per day up until the end of voting, which is October 22. The finalist receiving the most votes after the month long peer voting period will be named the Ultimate College Football Fan and will receive 2 tickets to their team's bowl game or bowl game of their choice, they will also have the opportunity to tour ESPN and possibly be used on some of ESPN's TV shows and commercials.

Once you have registered or logged in, type in "STUBHUB" in the search and you will be directed to the voting page.

If you can't access the voting page, go to google.com and type in "Ultimate College Football Fan Contest."


To enter the contest I submitted the photo attached "Red Reign_StubHub" and a story to introduce myself. Below you will find that story as it was written and should appear on ESPN.com's website:


Some background on me:

I have been painting up for UofL football and basketball games since I arrived on campus back in August of 2007. I have been named Most Spirited at UofL (3 times from pep rallies and ticket swaps) and have been featured on the UofL website and used for a recruiting postcard for incoming freshmam. I have been photographed and interviewed 100's of times and been featured on StubHub commericals as well as opening videos for the actual football team. I even have my own alias when it comes to painting up: Red Reign. To put it simply if you go to football games, you have probably seen me or know who I am. 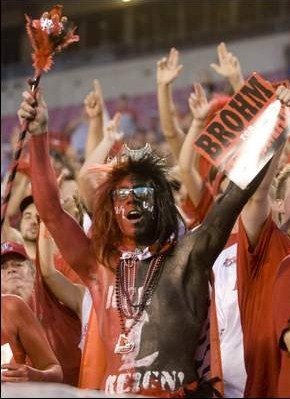 Let's bring this home for Scott.