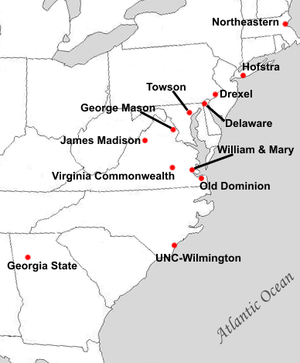 A huge game in the race to finish directly behind Michigan State.

ESPN2? Really? All right, your world.

Well, at least your still one of the hottest topics in the league, Pitt.

I really, really, really hope the Colonial quarters and semis are televised somewhere. There are at least five teams in this league capable of winning a game in the NCAA Tournament.

The 'Tops have dropped four straight after a 4-0 start in The Belt.

Not your fault, Pelph. You did the right thing and you'll do well at your next gig.

Ole Miss has lower-seeded team getting massacred in the first round of the dance written all over them.

Left coasters should be thankful for the east coast bias, because the Pac-10 is awful, it's unbelievably awful, and that fact hasn't received nearly enough attention thus far this year.

There's no reason for Santa Clara to not be this non-competitive in the WCC. Steve Nash, for God's sake. Throw it out there.

WCC'ers apparently hate this TV deal, and I still have no idea why. I mean I'm typing a sentence about a Portland/San Francisco college basketball game. I just did it.