I'm just gonna go ahead and say what everyone else is thinking: Samardo Samuels and Terrence Jennings should have been sharing the floor for the bulk of games a long time ago. When you have a team that might not be as naturally gifted as some of its immediate predecessors, you have to play your most talented guys, regardless of position. I don't think whether or not Jennings is one of the five or six most talented players on this team is up for debate.

It's true that the Samuels/Jennings experiment hadn't exactly gone smoothly in its first few trial runs, but one of the two was quickly yanked off the floor in each case, and the pair were never again given the opportunity to co-exist. It was a trend that continued in the first first six minutes of Sunday's game, as Cincinnati dominated the glass on both ends of the floor and raced to a double-digit lead. The only difference this time was that Pitino left the frontcourt duo on the floor and allowed them to either sink or swim. The result was a big run to end the first half followed by one of the best 20-minute performances of the season.

It seems Samuels and Jennings will be manning the paint together for the remainder of the season, and that's the way it should be.

Smashing a ship in half? Check. Bombing volcanoes for no apparent reason? Totally. DESTROYING THE EARTH?! YES. The man was that good.

The Jennings/Samuels storyline was the main point of focus for most Cards fans (I led with it), but Delk was the difference in this game. Without his hustle block and fadeaway three from the corner after Cincy had cut the lead to two, I'm not sure Louisville isn't riding a four-game losing streak right now. And it goes without saying that if his 13-point, 11-rebound contribution is wiped out completely then the Bearcats certainly would have left Freedom Hall with a victory.

"Reggie Delk killed us," UC head coach Mick Cronin said after the game. "We didn't expect him to get a double-double. He played great."

Expecting Delk to be this productive every night for the rest of the season would be foolish, but him stepping up and becoming a defensive stopper and reliable offensive threat could easily be the difference between NIT and NCAA Tournament.

What the hell was the deal with Lance Stephenson? He scored 12 points in about 15 seconds, then takes two shots the rest of the half and zero in the second half. I understand the Delk did a commendable job on him, but honestly I don't even remember him being on the floor after his final missed shot. Very bizarre.

More and more frequently I'm finding myself belting out the "Shots" song at various moments throughout the day. It's ruining just about every relationship in my life. Still, I wish there was a way I could do it randomly in posts, sort of like the Walker Lever. Feel free to plug it in yourself whenever you feel it's most inappropriate.

The win brings Louisville's RPI to 44 and its strength of schedule to No. 8. Cincinnati, at No. 48, was U of L's first victory over a top-50 RPI squad.

The Cards are just on the outside of both the latest SBN and ESPN brackets.

Airballs have zero effect on the Preston.

At one point in the first half Jerry Smith motioned for everyone on the bench to get up, and everyone did with the exception of Terrence Jennings (who had just come out of the game) and Edgar Sosa. While Sosa's solid play at the end of the game seemed to bolster both his mood and confidence, this is the type of maturity lapse he can't afford. I understand that this is him being upset with himself and not about him being on the bench - he was later the first to congratulate Siva as the team walked off the floor for a timeout - but he has to know that everyone sees this and that it does have an effect.

Jerry Smith is having a far worse season than Sosa and was again playing far worse than Sosa on Sunday, but his effort level never wavers and when he's out of the game he's always on is feet and doing his damndest to snap a towel in half. 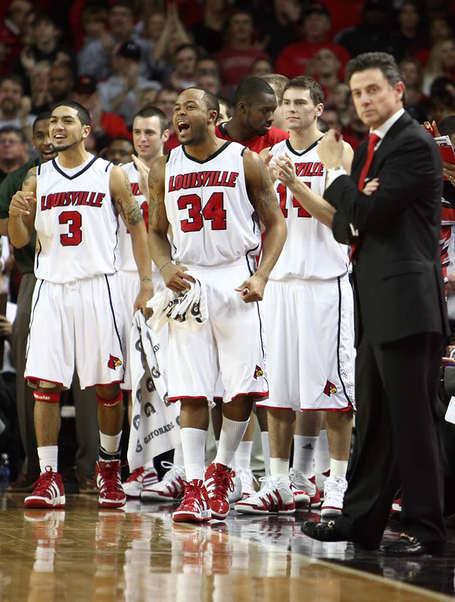 Let's be blunt: no one on this team is good enough to be selfish. Any accomplished goal over the course of the next couple of months is going to require every individual wearing a Louisville jersey to fully give-in to or continue to maintain a Cards-first mentality.

Two years from now Peyton Siva will be the best point guard in the Big East.

I have no idea what prompted this monumental change in Samardo Samuels, but I would like to take it to dinner. I never would have predicted that he'd get the better of Yancy Gates, but the kid is officially in beast mode.

I still want to punch the Big East sportsmanship kid directly in the head.

The big loser in this whole Samuels/Jennings deal would appear to be Rock Buckles, who didn't remove his warm-up once on Sunday.

Pitino said after the game that his goal for this team was to win seven of its last 11 games. If that comes to fruition then we should all be able to rest easily on Selection Sunday Eve as no Big East team with 11 conference wins has ever been left out of the field of 65 (last year's Providence squad was the first with 10 wins to ever be omitted), and Louisville would own at least two victories from the group of Connecticut, West Virginia, Syracuse and Georgetown. Anything less and the Cards will probably need at least one victory in the Garden for us to feel confidence about dancing.