A must-win game is one where the team in question's season will come to an end immediately should it not emerge from the contest victorious. Misuse of the term on this blog is grounds for immediate banishment.

While lumping this evening's game between Louisville and Seton Hall into the category of "must-win" for either side would be a misstep, stating that a victory would be enormous and a loss crushing for each would not.

Seton Hall was the sleeper pick of many a national pundit before the start of the season, and the Pirates had many of those prognosticators thumping their chests after they raced to an 8-0 start. But Bobby Gonzalez's club is just 1-4 in the Big East, a mark which might have more to do with an unbalanced schedule than the team's collective underachievement. Each league foe SHU has faced currently maintains at least a .500 record in conference play.

The load lessens in late February and early March when the Pirates end the season with a seven-game stretch that includes St. John's, Depaul, Providence, Marquette and a pair of tilts with Rutgers. While this will certainly makeover SHU's league rank, they still are in desperate needs of quality wins to bolster their NCAA Tournament resume, and those opportunities are going to become few and far between in the very near future.

Louisville is also desperate for a statement win, especially after blowing a pair of key opportunities against Villanova and Pittsburgh last week. While Seton Hall doesn't present the opportunity the Wildcats and Panthers did, U of L's poor non-conference performance has made holding serve against teams the Cardinals should beat every bit as important as eventually claiming a victory over someone with a number in front of their name.

I do not care for Bobby Gonzalez. 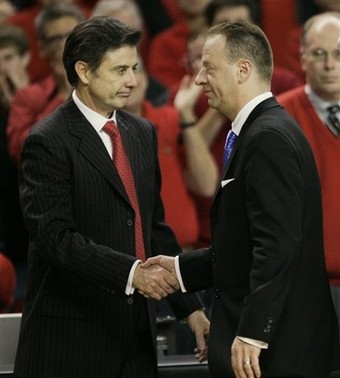 During Louisville's tenure in the Big East, Seton Hall basketball has been known primarily for three things: 1) Not being very good. 2) (Ironically) talking a lot of shit. And 3) Having a head coach who is possibly insane.

Whether it's punching an assistant coach in the face during halftime, berating reporters before and after games, calling up reporters and accusing them of acting in collusion with Rick Pitino, or simply making enemies with just about every other coach in the conference, Bobby Gonzalez has made an 18-34 Big East mark about as entertaining(?) as possible.

So while I do not care for the man, I hope he remains in Newark forever.

--Seton Hall has had no trouble lighting up the scoreboard this season, leading the Big East in scoring at 84.7 ppg. The high man is Jeremy (F'in) Hazell, who ranks among the top scorers in the nation at 22.9 ppg. Herb Pope is the squad's best option down low and he averages a double-double with 12.4 ppg and a team-best 11.4 rpg.

--Louisville is a one-point favorite.

--The Cardinals are just 1-3 on the road this season.

--Pope has emerged as one of the best big men in the Big East, but his achilles heel in SHU's losses have been fouls. In a Jan. 2 loss to Virginia Tech, Pope fouled out in 18 minutes, leaving him with three points and five rebounds. Four days later, he was limited to 24 minutes against Connecticut and still had a double-double with 10 points and 11 boards. And on Jan. 14 against Georgetown, he fouled out in 22 minutes with six points and 10 rebounds.

--The last ten meetings between the schools:

--Senior point guard Eugene Harvey reportedly told Gonzalez this week that he's more comfortable coming off the bench, meaning Keon Lawrence will continue to start at the one for the Pirates.

--Seton Hall has never been known for its defense under Gonzalez, but the Pirates allowed Georgetown to shoot an almost unbelievable 68% from the field in an 85-73 loss a week ago.

Yeah, it's the same. We've passed on an amazing photoshop opportunity this week.

--"I mean, we haven't had a break. It would help us to play -- and I'm not saying any game in this league is easy -- a DePaul or a South Florida or Rutgers. Just somebody that's a little more normal; it might help us." --Bobby Gonzalez

--"This will be another difficult Big East road game. They're a team of great runs. If you're up 10 or 12 you're not safe, if you're down 10 or 12 you can come back. They're the number one scoring team in the Big East and they get a lot of their missed shots back." -- Rick Pitino

"We're all trying to look past the loss. Both losses were tough. I mean both of them were games we should've won. But this conference is so tough, Seton Hall is tough, Cincinnati is tough, so we can get some good wins and be right back up there in the race." --Samardo Samuels

--"We just need a little more defense from the four spot. We're not getting enough defense, rebounding and physical play from that spot. [Buckles] is a foul waiting to happen. It's just a matter of keeping him in the game that's one of the reasons he hasn't started. But he has a live body and a lot of upside." --Rick Pitino