Too Early For Some Links? In Which Brett Dawson Misses The Point of Pitino's Zone

Share All sharing options for: Too Early For Some Links? In Which Brett Dawson Misses The Point of Pitino's Zone

Happy New Year everyone.  Now that we've got that out of the way.

CJ's UK beat writer Brett Dawson has a story today about UK's three point shooting versus zones, echoing and analyzing the conventional wisdom that the way to stop the DDM offense is to play zone:

has noticed the crowds. Not the packed houses his University of Kentucky basketball team plays in front of. Not the swarm of fans who flock to Cousins and his teammates when they venture off campus.

No, Cousins is taking note of the on-court crowds — the horde of defenders packed in and around the paint as UK's opponents try to stop post-ups and dribble drives, leaving perimeter jump shots available.

But UK has compensated for the zone defense by shooting really well from three point land:

As No.3 UK (14-0) prepares to host the University of Louisville on Saturday, the Wildcats are shooting 42.2 percent from three-point range, which leads the Southeastern Conference. UK has made 97 three-point shots, tied for the third-most in the league.

Even John Wall, who everyone knew was a bad shooter,  both from the "perimeter" and "mid-range" according to that Scout profile, has turned it on this year:

Wall has made 13of30 three-point tries this season, a solid performance for a player who was thought to be a poor outside shooter when he arrived on campus. He credits that performance to extra hours spent in the gym.

The lightning-quick Wall said he spent that extra time because he know opponents would back off him on the perimeter. And it's likely they'll continue to do so despite his improved shooting.

All of this is fine.  Where the articles goes wrong is how Dawson applies those facts/stats/CW to this game:

UofL has employed plenty of zone

in recent years, and the Cardinals are likely to be another in a line of opponents that dares the Cats to fire away from long range.

Please correct me if I'm wrong in the comments, but I thought the whole point of the Pitino zone was to STOP three point shots?  Generally teams haven't shot well from 3 against our zone because it isn't a traditional 2-3 zone.  The wings guard the perimeter just as much as the guards.  There are two plays that destroy our zone - a big man gets the ball at the high post and immediately dumps it down low to a posting up bigger man.  How many times did we see that last year?  This works because the wings are worried about the three point line so it is not like there are three guys down low at all times, which is what Cousins is talking about in the opening paragraphs of that story. The other thing that works is the Illinois Moving Pick play - you may remember that play being run 84 times resulting in 83 wide open three pointers from the corner in the dome in 2005. 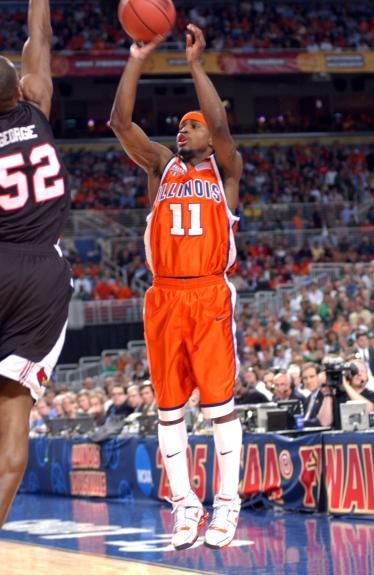 Yes, we will play zone, but not to stop them from scoring inside.  We will play zone like we do against everyone because it takes them out of their comfort zone on offense, and it compensates for three point shooting by having athletic wings.  Last year, our athletic wings were lottery picks who could also rebound by just jumping over people.  This year, our athletic wings (Swop, Buckles, Kuric and Delk) weigh about as much as I do and are going to have a heck of a time rebounding against Cousins, Patterson and Orton and their other monsters down low.

Dawson's point about UK is well-taken - with Cousins and Patterson down low, Wall running the show and guys like Bledsoe, Dodson, Miller and even sometimes Ramon Harris taking wide open 3s - I mean, yikes, that's a sick lineup and the scariest UK team we've faced since 1996.  But don't expect our zone to give up dozens of wide-open 3s tomorrow.  And if it does, it is not by design.

In other news, this CJ story about the frosh's reaction to the rivalry is pretty fun.  The best quote:

"I'll tell them it's like what we witnessed at UNLV, times that by 100," Sosa said. "(Two years ago) UK was the toughest place I ever played, and we were up double digits the whole game. What we are going to see on Saturday, I don't think even I have ever witnessed anything like that.

Next year's post by Mike on how big of a rivalry this is should start with that quote.

Finally, Charlie Strong is awesome.  Follow his Twitter or at least check out his last 5-6 tweets.  Is it possible that he's as excited about us as we are about him?  Is it possible he's......talking directly to me?