Louisville beats Indiana State, eases the fears of no one

Share All sharing options for: Louisville beats Indiana State, eases the fears of no one

It's been two days, I still haven't rewatched the game and I don't know if I'm going to rewatch the game. Having a conversation with a friend's parent at a wedding reception and receiving seven or eight text messages in the span of 25 seconds was about as much of a game experience as I needed.

If I am able to bring myself to crack into the Tivo then i'll come back with something else, but here's what I know without rewatching a down:

--Darius Ashley's facebook status immediately after the game was apparently "F---the entire Louisville football program," or something similar, before quickly being changed to the more mild, "Anxiously awaiting the arrival of my next head coach."

Things are not OK.

--Frank was right about Philpott being held out of the game, but there were several other players who were M.I.A. without explanation. I really don't think Kragthorpe realizes how much easier he could make things on hilmself if he made any effort whatsoever to open up an honest line of communication with the fan base.

--We've committed the same unforgiveable penalties for three straight years. It's absolutely inexcusable and it absolutely falls on the heads of the coaching staff. 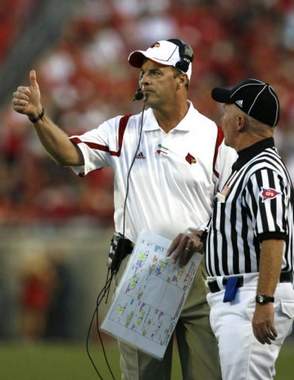 --I'm not saying we're the worst team in D-1, but I couldn't tell you with a straight face that I thought there's another FBS squad who wouldn't have beaten Indiana State by more than 20 points.

--It's awful that it's come to this, but the only way to calm things down right now is to beat Kentucky. It doesn't matter if the team looks surprisingly good, or the game is lost on a bad call; Louisville has to win in Lexington on the 19th for the program to have regain any sense of order.

--I thought that the worst thing to come out of Saturday would be overconfidence after thrashing a team that would lose to a handful of high school teams (not hyperbole), and I'm truly stunned that the main topic of discussion is the poor play of a Cardinal team that couldn't win by more than three touchdowns.

--I hate this so much. I just want to be excited again.