Share All sharing options for: Celebrity look-a-like UofL coaches on whom you may place your future blame

Only 3 days 'til kickoff saturday and i'm trying to psyche myself up for the Larry Bird University game, so while we wait for [UofL kicker to be named (read "flipped a coin over") later] to officially begin what we all expect, for better or worse, will be a program changing season.  Due to the recent (and substantial) coaching turnover, I can at best name two other coaches on the staff. I'm guessing most of you feel the same and would like a face to place the blame on for the year's upcoming blunders. All Kragthorpe's aside, here are some coaches in vital positions from your 2009 (and hopefully 2010?) UofL coaches. Most of this info is right from the UofL athletics site, but I never go there to do much reading.

So when you're scanning the sidelines and see these celebrity look-a-likes, you'll know who they are and what they do (or just failed to do on that last play) 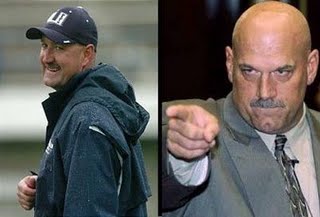 This may be the most visually intimidating coach we have out there patrolling the sidelines. "Pick your favorite 80's pro wrestler" Brent Guy will be holding down the title of "Defensive Coordinator/Lineman coach/Pro Wrestler stunt man." During his head coaching tenure at Utah State, Guy amassed an overall record of 9-38 before he was ultimately replaced by cross-state rival Utah assistant Gary Anderson who looks like the bad guy Eric from Billy Madison.

Guy was the defensive coordinator at ASU for four years before Utah State came a callin'. where he was the defensive coordinator for four years. In 2004, ASU's defense ranked 28th nationally in rushing defense, 32nd in pass efficiency defense and 48th in both total and scoring defense.  Also, while there in 2002, ASU's defense forced 40 turnovers and that  includes 22 interceptions (good for third and fourth in the country, respectively). You may have heard of one of his players: Terrell Suggs, who set the NCAA record for sacks then won the Bronko Nagurski Award (nation's top defensive player), Lombardi Trophy (nation's top lineman) and Morris Trophy (Pac-10's top lineman).  So apparently he can coach some athletes.

Other notable positions include defensive coordinator at Boise State from 1998-2000. There the Broncos established their dominance of the Big West, as they won the 1999 and 2000 Big West Championships.  While Guy was there, the defenders of the smurf turf led the Big West in total defense, rushing defense and scoring defense in both 1999 and 2000.

Guy, who has been a part of nine bowl teams in his playing and coaching career, had two stints coaching at his alma mater of Oklahoma State. After serving as a graduate assistant (1986-87) and recruiting coordinator (1988) there, Guy coached the Cowboy linebackers from 1989-91 and then again from 1995-97.

Interestingly, Guy graduated from Oklahoma State with a degree in hotel and restaurant administration. So i'm sure he can throw together a mean complimentary breakfast bar.

Brent Myers or the guy from Heroes

In 2006, the Sun Devils finished second in the Pac-10 averaging 169.7 yards rushing per game. It marks the first time since 2001 that ASU averaged more than 150 yards on the ground. In 2005, the Sun Devil offensive line was decimated by injuries, however with the adversity came perhaps the best job of any offensive line coach in the nation as ASU finished the season ranked No. 2 in the nation in total offense (519.1 yards per game), including a school record 773 yards in ASU's 52-21 win over Northwestern. Even more impressive is the fact that ASU rushed for 145.7 yards per game, its highest average since the 2001 season.

In 2003, Myers was part of a Utah staff that led the school to the Mountain West Conference championship, the school's first outright conference title since 1957. Myers also spent three seasons as the offensive line coach at Washington (2000-02). In 2000, Myers oversaw one of the nation's best blocking units that helped Washington claim the Pac-10 title and a victory over Purdue in the 2001 Rose Bowl.  Also of major note, Myers helped lead BSU to the 1999 Big West Conference championship and a victory over Louisville in the Humanitarian Bowl. I don't think I like this guy anymore.

Myers also coached at Eastern Washington (1982-83, 1985-91), Southern Illinois (1984) and Northern Arizona (1992-97). He was named associate head coach at NAU in 1994 and offensive coordinator in 1996. That year, the Lumberjacks led the nation in total offense and scoring and became the first Division I team to have a 3,000-yard passer (Travis Brown) and a 2,000-yard rusher (Archie Ammerson) in the same season. For his efforts, Myers was named the national Division I-AA Offensive Coordinator of the Year in 1996.

Larry Slade joins the Cardinals' defensive staff after 10 seasons with Fill Phulmer at UT in the defensive backfield and is known for turning out some of the nation's best secondary units. Despite a 5-7 record by the Volunteers in 2008, Slade was instrumental in leading one of the nation's top defensive units. The Volunteers were ranked fourth in the country in pass defense and tied for the third in the country in total defense.

Slade's 2000 and 2001 secondary units, aided and abetted by the rest of the defense, established school season records with 64 and 72 passes broken up, respectively. Before coming to Tennessee, Slade spent five seasons at Texas A&M (when they were good) from 1994-98. His 1997 unit allowed a nation's best three passing touchdowns. I think UofL gave that up each game last year.

Prior to joining the staff at A&M, Slade spent two seasons at Maryland as the defensive coordinator from 1992-93. Slade also spent six seasons at Washington from 1986-91, which was highlighted by a national championship in 1991, during which the Huskies ranked first in NCAA statistics for pass efficiency defense. Slade also enjoyed stops at Southern Illinois (1984-85), Howard (1983), Richmond (1982) and his alma mater Shepherd (1973-81).

(no need for a celebrity, this pic is enough)

Jeff Lewis begins his first season as the wide receivers coach at the University of Louisville. Lewis was an administrative assistant with the Cardinals last season. Lewis played five seasons in the National Football League with Denver Broncos and Carolina Panthers from 1996-2000.

Lewis has a long-standing relationship with Kragthorpe after spending three years together at Northern Arizona, where Lewis starred as a quarterback from 1992-95. A first-ever three-year captain at NAU, Lewis was a second team All-American as a junior after throwing for 3,355 yards and 26 touchdown passes, which still rank fourth all-time in school history.

As a senior, Lewis was a third-team All-American. He was nominated for the Johnny Unitas Golden Arm Award as a senior and a finalist for the Walter Payton Award, given to the top college player in Division I-AA. He finished his career with 9,639 yards and 67 touchdown passes, which all rank fourth in the school annals. Following his senior season, Lewis played in the Senior Bowl before he was a fourth-round selection and the 100th overall pick of the Denver Broncos. He was the back-up to John Elway and was a part of two Super Bowl teams in 1998 and 1999.

Matt Wells or (Sorry, Matt, I couldn't think of anyone else)

I see what coach SK likes in this guy.......himself.  Matt Wells joins the U of L staff to coach the quarterbacks (I have a feeling SK might have have a tendency to butt in here) after spending two seasons as the wide receiver and recruiting coordinator at the University of New Mexico (Go Lobos!). Last season, Wells' wide receivers caught 130 passes for 1,294 yards. He also coordinated a kickoff return unit that finished sixth in the NCAA (please take note special teams) and second in the Mountain West Conference.

Wells and Kragthorpe have a long history together after spending five seasons at Tulsa from 2002-06 as tight ends coach and recruiting coordinator, while Kragthorpe was the head coach. Tulsa tight ends were instrumental in the team's recent offensive success. Wells coached 2005 All-American Garrett Mills, who established an NCAA single-season record for receiving yards by a tight end with 1,235 yards.

Tulsa's tight ends caught the most passes in the nation in 2003 with 89 receptions for 855 yards and 12 touchdowns. They combined for 83 catches and 919 yards in 2004. The Golden Hurricane's 2004 recruiting class was rated as the top-ranked unit in the Western Athletic Conference by PrepStar magazine and Rivals.com, while the 2005 class earned best in Conference USA by Rivals.com.

A three-year letterman at Utah State (toooo many USU references for one article), Wells played quarterback for four years (1993-96), and was the starter as a sophomore. He played free safety as a senior. A three-time All-Big West academic selection, Wells was a member of Big West Conference championship teams in 1993 and 1996.