Share All sharing options for: CJ: Position Battles Shaping Up

The 2009 college football season officially got underway yesterday as the Cards held their first practice of the season.  According to the Courier-Journal, the depth chart is very much in flux (aka "wide-smoking-open") with position battles shaping up at QB, corner, safety, rover (what Brent Guy calls weakside LB, but what may indicate we will be seeing the 3-3-5), the defensive line and place-kicker (apparently they haven't read Parts 1 and 2 of the season simulator, in which Tim Doughtery dominates this year).  Heck, even the punting duties are up for grab, with someone called Jon Payne in the mix, which will be confusing if placekicker Ryan Payne also wins the starting job.

The University of Louisville football team opened its fall camp Thursday without an incumbent starting quarterback for the first time since 2003. Naturally, it's the biggest question mark.

But the Cardinals have wide-open competition in plenty of other areas.

Free safety and finding a second starter at cornerback are tight contests. Chaz Thompson moved from receiver to cornerback last year before converting to safety in the spring. Thompson and senior Richard Raglin, who received a medical redshirt to play this season, are the top two at free safety.

Karldell Dunning and junior-college transfers Preston Pace and Anthony Conner are competing to start at cornerback.

The Cards have a budding competition at punter, too. Cory Goettsche handled the duties last season but is getting a push from Jon Payne.

Kragthorpe said placekicker also is wide-open and that he hopes Chris Philpott, Tim Dougherty and Ryan Payne could keep up the momentum from improvements they made in the spring.

The competition is heating up at weakside linebacker, which under new defensive coordinator Brent Guy is referred to as the rover. Brandon Heath took repetitions with the first team Thursday, but Chris Campa is pressing him for the position.

The defensive line lost three key players and looks to some talented, yet mostly, inexperienced players to fill the void. Sophomore ends William Savoy and Greg Scruggs ran with the first unit Thursday, as did tackles L.D. Scott and Joe Townsend. But they are by no stretch solidified as the starting four.

Click through and read the article for the quotes, which, in addition to the normal Kragisms, include Daniel Covington sayng that his Coach is "throwing bullets" at the starters to see how they react.  If they are smart, they will duck, cover and run.  Anyway, I would be mildly surprised if LD Scott beat out LT Walker at DT, considering Scott has played out of position at DE for the last few seasons. 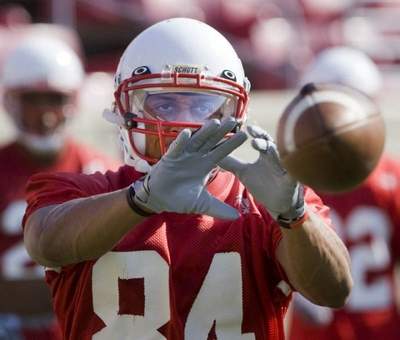 One more day of open practice and then we won't see them again until the Indiana State game in a little less than a month, so until the Games Notes with Depth Chart is released that week on uoflsports.com (and the Card Chron staff will be working round the clock hitting F5 to post the depth chart as soon as it is released) all we have is speculation, rumors, innuendo and the hope for an injury-free fall camp.

If anyone made it out there yesterday, feel free to give your first-person account below in the comments.