The game story is a must-read...if you're kind of bored.

In what was supposed to be a "tune-up" game in preparation for the Louisville Cardinals, the Sycamores came out against the NAIA Hawks with intensity, passion and a winning demeanor, but they simply let it vanish after the second half.

Quincy was determined to win, and by the sound of head coach Bill Terlisner, they played as if they wanted it more than ever.

"We have played D-1 schools before, and we have come close," Terlisner said "But we have never put together two good halves to do it. No one expected us to come in here and win, but this jumpstarts our program."

Sure, D-1 doesn't technically exist anymore, and even if it did it still wouldn't include Indiana State, but whatever, live it up, Bill Terlisner. Crack a Strohs. 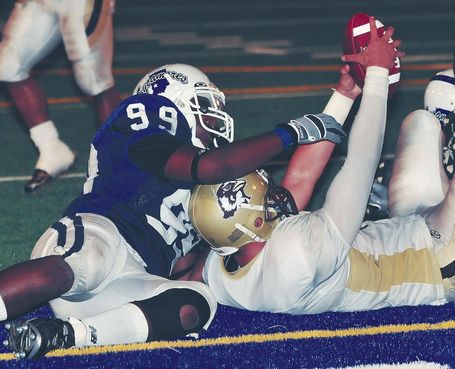 Other highlights of last night's epic action include:

--The Sycamores promptly fumbling the ball away on a center exchange during the first series in said overtime.

--And finally, this quote: "This program is nothing but positive, and there is no finger pointing in here."

--Being immediately followed by this quote: "If there is any finger pointing it goes towards me."

These guys are too cocky for their own good and I think it's high-time someone took them down a peg or two.