What to read while making a late push for starting QB

Share All sharing options for: What to read while making a late push for starting QB

Newly named backup Adam Froman began throwing again yesterday as he begins to return from a back injury that has kept him sidelined for the better part of the last two weeks.

Froman couldn't mask his disappointment when asked about the situation by a California-based publication.

Froman’s injury has been described as a pulled muscle in his upper back. He said it might have occured from too much throwing. He doesn’t have an exact timetable for his return, but hopes to be available, if needed, for the season opener.

As I said after the news of Burke being named the starter first broke, I think this is the worst case scenario for the team because, regardless of what Steve Kragthorpe says, nothing has been settled. Burke and Froman will both play against Indiana State, and since it's going to be so difficult to take anything away from that game, they'll both also play two weeks later in Lexington.

The more I hear, the more I wish Kragthorpe would just go with Stoudt now and let him take his lumps early as opposed to throwing him out there in the middle of a lost cause season - which will happen if the two juniors struggle enough - where the damage done to his psyche would be more extensive.

Or maybe Burke sets the world on fire, what do I know?

SI says Terrence Williams is part of the New Jersey Nets' lineup of the future.

SF -- Williams, 22 years old, arguably the best perimeter defender in the draft, a strong rebounder at 6-foot-6 and with enough ball-handling skills that some teams would have considered him a potential point forward. Not that Williams -- who isn't a great shooter and has been knocked for lacking focus -- is a sure thing. One executive said before the draft, "He could be a substantial player. And he could be out of the league in three years."

T-Will also was in the news this week for playing Guitar Hero with soldiers stationed in Qatar. 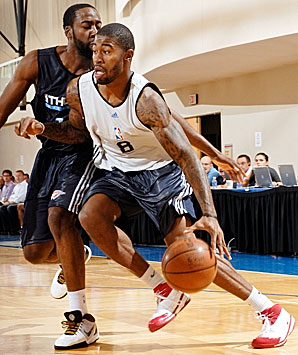 Eric Crawford's blog post this morning is the type of stuff the C-J has to do more of.

The U of L women's soccer team heads to Lexington tonight to face the Wildcats. If they win, I'll give an excited fist pump. I swear.

And finally, huge congrats to Gary Barnidge, who appears poised to start at tight end for the Carolina Panthers this season.

But there might have been more than a little symbolism to this scene earlier this week at the Panthers' training camp in Spartanburg:

As most of his teammates trudged to the locker room after a night practice, Barnidge stayed behind with rookie Andrew Davie, running wind sprints on an unlit practice field.

Back and forth they went across the darkened field, finally stopping and taking off their shoulder pads in exhaustion.

Ran a couple miles three weeks ago. That's called being able to relate.