Share All sharing options for: Ranking the potential Cardinal victories in order of descending pants off-ness

It appears unlikely that you'll have to use a second appendage to communicate the number of victories the Louisville football team will achieve in 2009, but what if Kazaam appeared before you right now and said your boys could pick up a win against any team you chose? Who would you take?

While my pants appear destined to cling depressingly close to my body this autumn, let's take a quick look at the potential victories that would permit them to make that glorious journey to the floor, starting with the win I want the most. 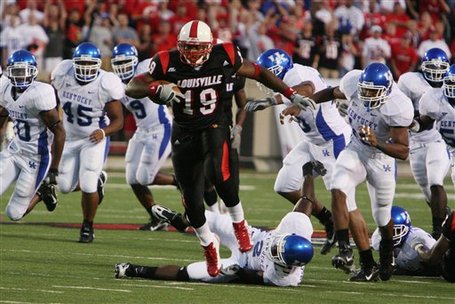 There were seasons during the Petrino era (don't cry...don't you cry yet, these people are looking to you for comfort damnit) where Louisville's biggest rival would have failed to crack the top two, three or four on a list like this. Now, for the second straight season the Wildcats are, in my eyes, the runaway choice for potential sweetest victory.

From a fan stand point, maybe the best thing about having your team suck immensely is the opportunity to claim a win over your biggest rival and spend the rest of the year saying "yeah, we suck immensely and you still couldn't beat us" to everybody, even people who don't watch sports. 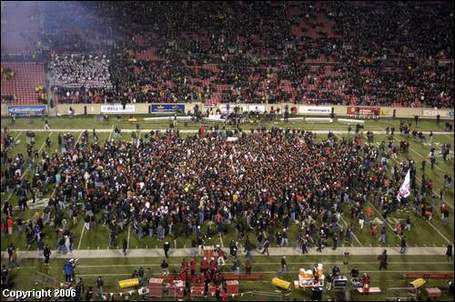 The two players in college football's most rapidly developing rivalry appeared destined to play classics forever...until Pat White came into PJCS on Senior Day and solidified his legacy of being to U of L football what Chipper Jones and stairs are to the New York Mets by accounting for all five Mountaineer touchdowns in a 35-21 win last November.

A Louisville win in Morgantown wouldn't completely save this once quickly burgeoning rivalry from dying a premature death, but it would greatly better the possibility of it regaining its buzz sooner than expected.

And it would cause me to take my pants off. 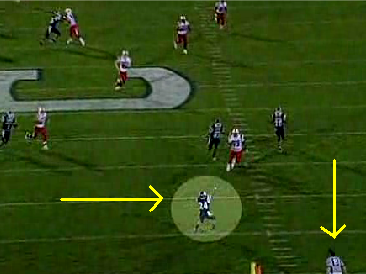 This is where, to me at least, the list gets increasingly debatable.

It didn't sting as much as that whole Larry Taylor business, but Lawrence Wilson's pick six and getting the "hush" finger to the mouth from an anonymous Husky linemen as the clock approached zero during last year's defeat certainly left an impression.

In excruciating defeats the past two years, Louisville has outgained UConn 829-574. The Cards still lead the all-time series 3-2, but it still feels like we owe these guys about 15. 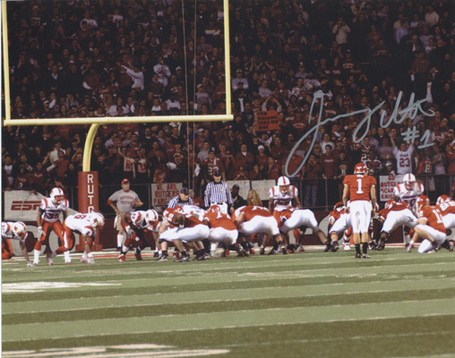 Less than three years ago we were one decent quarter in Jersey away from playing for the national championship.

Does that not absolutely blow your f---ing mind? Given the current state of things around here, the loss is almost harder to accept now than it was then.

Ruining the perfect season, the Ito point, the overall general unlikeability of Greg Schiano, 63-14. Yeah, I'd like to have this one. 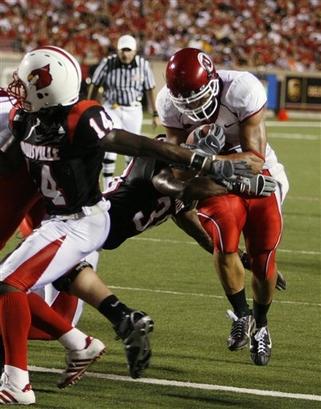 Is Rod trying to tackle that guy backwards? If only that were the worst decision he ever made.

Sure the 2007 loss was probably the moment where it became painfully apparent that the season was not going to be saved (as well as the death of Go Cards Baby!), but the fact that the Utes could very easily be the only ranked team the Cards face in '09 and that they own the nation's longest winning streak (and don't have a national championship to show for it....f'in college football) are the reasons they sit above other conference semi-rivals. 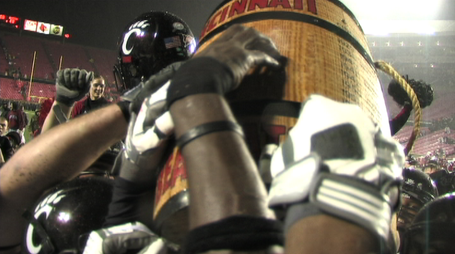 If we had beaten them last year and kept the keg for the 55th straight year then this one would definitely be a few spots higher.

It still hurts and I still miss it. 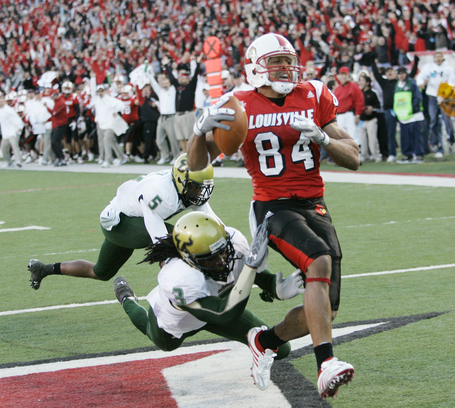 The lone streak that the Kragthorpe era has manged to keep in tact seems to be the inability to lose to USF at home or beat the Bulls in Tampa. All the other ones are gone, so why the hell not? 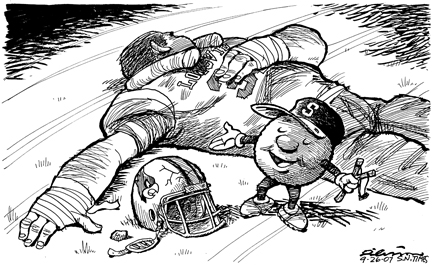 Yes, they've provided the kill yourself moment in each of the past two kill yourself seasons, and yes, they've recently made a habit of stealing recruits from us in both sports, but...it's Syracuse. While finally handling the Orange would be nice, it certainly wouldn't be anything to thump our increasingly caving chests over.

The "Mills Kills" game still ranks somewhere in my top ten or 15 heartbreaking sports moments, but that was a long time ago. While the state of the Louisville program is lower than it's been in a decade, this, like last year's Memphis game, is one that's going to mean significantly more for the opponent.

The Golden Eagles have been consistently average since U of L bolted for greener and Easter pastures, and Conference USA isn't what it was when the two were relatively heated rivals. It'd be nice to beat these guys for the sake of nostalgia and, you know, victory, but either way the game won't elicit anywhere near the emotion it did in the late '90s.

I have no real feelings of ill-will toward the Panthers. I don't expect to win this game. If we did, it would be cool.

That's really all I've got. 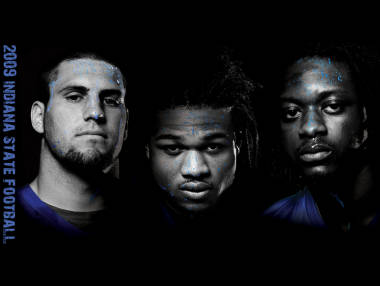 If this game is close after the first 30 minutes I'll be numb for the second half and probably won't notice if we actually lose.

If Louisville is losing to Arkansas State on Halloween then the chances are pretty high that the season to that point has been less than a joy ride.

Thoughts are mildly welcome below.