Share All sharing options for: Better Know a Cardinal: WRs and RBs

The second installment of your 2009 newbie introduction will feature the skill positions of receivers and tailbacks.  These recruits definitely have some potential.  They're not household recruiting names yet, but neither were Harry Douglas (ranked #139 of WRs) and Mario Urrutia (ranked #66 of WRs). Unfortunately, UofL is in the perilous predicament where they must recruit guys based mostly on potential and not necessarily on their achievements and scouts ratings. Here's to hoping our recruiters know what they're doing.  At least there are some cool names.

* indicates the rating from scouts.com 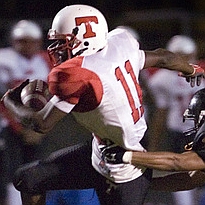 A definite pick to the All-Awesome Name team, Boogie McCray (video) originally committed to NC State, but ended up having academic issues.  Lucky for us, he would later go on to pledge his allegiance to the Cards. I can only hope his academics will not be an issue here at UofL.  Here is a nice little story about him from his high school coach and teammates perspectives.

McCray was a high school teammate of another UofL commit Mike Privott and chose UofL over ODU and Marshall (and sorta NC State). In his senior season, McCray rushed for 1,627 yards and 18 TDs while being voted Eastern District Offensive Player of the Year. He also registered 14 sacks and 49 tackles on the defensive side of the ball too.

McCray looks like a good physical running back compared to some of our smaller elusive backs (although I've seen him listed anywhere from 6'0 to 6'2) and may potentially be moved in at linebacker for his size. Do I hear a thunder and lightning combo?

Guaranteed Prediction: Mr McCray will give new meaning to the term "Boogie Cam" (which also brings back fond memories of Patrick Patterson - you know you laughed)

Let me just introduce you to Jeremy Wright like this:

UofL Wright Up (see what I did there): Played for Bud O'Hara at East Lake High School... rushed for 4,133 yards and 43 touchdowns in three seasons at East Lake High School... holds the state record for average yards rushing per game in Class 6A... has been clocked at 4.5... ran for a state-high 2,707 yards and scored 28 touchdowns... against Wekiva, he gained 492 yards - Central Florida's all-time best and the second-best rushing performance in state history... also rushed for 455 yards in a game... selected first team All-State in Class 6A... selected to play in the Central Florida All-Star game, where he was named the game's Most Valuable Player... selected to the 2008 All-Southern Team... ran for 1,240 yards and 14 scores as a junior, including 276 yards in the season opener... ran a solid 10.7 in the 100-yard dash... chose Louisville over Troy State, Central Florida and Iowa State.

I'm really psyched about this guy and don't know why he wasn't more heavily recruited.  His stats are amazing. His 40 time is great. The only knock on him might be his size. However, the Big East has been recently littered with shorter running backs who do just fine (see Vic Anderson, Steve Slaton, Noel Devine, LeSean McCoy, Curtis Brinkley), so I'll look forward to his blistering speed. 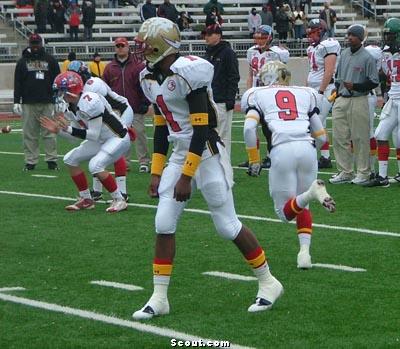 Farr had offers from the likes of Maryland, Virginia, Eastern Michigan and Akron (da zips). Here he is on signing day with teammate Horace Miller.

Per UofL: Played for Lawrence Smith at Baltimore Dunbar High School... considered one of the top prospects in the State of Maryland... three-star prospect by Rivals.com... rated a two-star player by Scout.com and the 179th-best wide receiver... rated as the 61st-best wide receiver prospect in the country... guided team to a perfect 14-0 record, a school record for wins... selected to play in the Maryland Crab Bowl... named to the Baltimore Metro team... recorded back-to-back 1,000-yard seasons... part of a Poets' squad which scored a state-record 196 points in four playoff games, eclipsing the old mark (141) held by state champion Urbana in 1999... was a first team Small School All-State selection... caught 49 passes for 1,383 yards as a junior... averaged 28.2 yard per catch ... also tallied 18 touchdowns... been clocked at 4.57 in the 40-yd dash... caught three touchdowns for the Poets in their 2007 Small School State Championship game... named to the 2007 Maryland All-State team...entered senior year rated the No. 57 receiver in nation... Maryland small school state champion in 2006, 2007 and 2008.

Farr is also known for catching a last-second TD pass (seriously, watch this) to help win his high school state championship game, so he's got a little "clutch" in him somewhere.

I think Farr is a great pickup for the staff at UofL.  Farr was the 57th WR prospect and a 3-star by Rivals.com. He is not going to get immediate playing time but should factor in to the depth charts soon enough.

From the UofL Bio: Played for Larry Coffey at Palmetto High School... is enrolled at U of fL... one of the top-rated players in the state of Florida... enrolled at Louisville in January... physical wide receiver... rated a two-star prospect by Rivals.com... ranked as the No. 15 prospect in Dade County... earned second team All-Dade County honors as a senior... missed time as a senior due to injuries... caught 35 passes for 356 yards as a junior.. named All-Dade Honorable Mention in 2006... chose Louisville over Western Michigan and Central Florida.

From what I've read, Andrell really wanted to go to Miami, but they didn't offer.  I'm sure his injury really hurt his chances at some bigger schools, but he should have a better chance of getting some valuable playing time here. Smith makes for a big target (not Chichester big, though) and should give corners plenty to worry about when he takes the field.

From the UofL Bio:  Played for Raymond Woodie at Palmetto High School... physical wide receiver who has been clocked as low as 4.42... clocked at 4.46 at the University of Georgia camp... three-star recruit by Rivals.com... ranked as the 137th best wide receiver prospect by Scout.com... rated three-star prospect by Scout.com... caught 52 passes for 718 yards and 11 touchdowns during his senior season at Palmetto High School... named to the All-Area team... recorded four receiving touchdowns in a win over Tampa Robinson... made first team All-Area and All-State... selected the team's Offensive Most Valuable Player... Palmetto dropped a 30-17 decision to Braden River in the Class 3-A, Region 3 quarterfinals to finish the season at 8-3... played in the Brad Price Memorial PAL Bowl, which is a game pitting Manatee County's best senior football players against seniors from Sarasota... recorded 39 receptions for 600 yards as a junior... selected first team All-Area... voted the team's top wide receiver... recorded 18 pancake blocks from his wideout position.

Copeland, even after his committment to the Cards, received offers from Ole Miss, South Carolina, USF, WVU, Alabama, ND, and Syracuse.  Back the truck up.  This guy was actually recruited by some big guns and chose UofL?  Welcome aboard!

Do you know how I know this guy is for real........the classy UofL shirt in the picture. Anyway, Copeland enrolled in December and competed in spring practice.  He will be giving the upper classmen a run for their money as he has earned a roster spot this year.